Just wanted to drop a line to our peeps waiting on AOE to come to fruition. We haven’t forgot about the project, in fact, we are actively working on it. Middara has taken us a little longer than expected to get out the door, so we wont be kickstarting AOE until late 2015, or even early 2016. This date depends on how smoothly things run when producing and shipping Middara.

However, you can expect regular updates about AOE here. We will be pretty transparent about the design progress moving forward, including a design journal that details changes and experiences with the project.

We have already made a plethora of changes that will bring the game to a new level in terms of customization and depth. Right now we are going over broad concepts before implementing them and trying them out. Some of these concepts have been a great success, while others, have failed miserably. Everything from deck building to some more wild concepts for levels and characters mechanics.

We are searching for new male designs and have yet to find that magic sweet spot. Back to the drawing board! 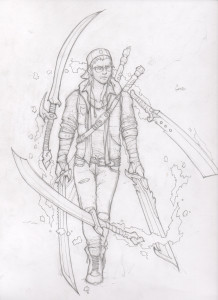 We have Geoff. The design started as a scene kid with too many swords. We are thinking that he has telekinesis, and a lot of swords. pretty simple design. But there is room for some cool mechanics with the idea.

Cypher, a well dressed kid with a huge swallow weapon… or maybe he is just a kid and the swallow weapon is normal sized? For colors we were thinking a sunken look in the eyes, like he has been up for way too many days. Mechanically, we were thinking he would be a bruiser that has some ranged attacks. Thematically the weapon could magically return to him. How cool would it be if the weapon could only be lifted by him? 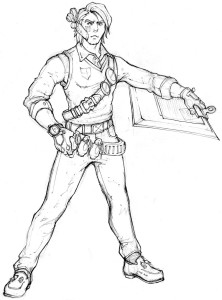 Deadly hall monitors! This idea got immediately shoved into the coop mode as a bad guy for a beat em up style adventure. I hope we can make that coop mode work, i would love to see a sentai group of bad ass hall monitors.

Some people felt that our original monster design was to creepy and edgy, so, here is a less grimdark coop monster. Introducing Metal Principle! Mechanically this character will be really cool if he makes the cut. We want to make him feel like a Japanese mech. Rocket barrages, drill attacks, detachable fists, the whole 9 yards.

A more fantasy design done for AOE. After doing it we considered just using it in Middara.

One of the more ridiculous designs. The workshop murder!? Get rekt son.