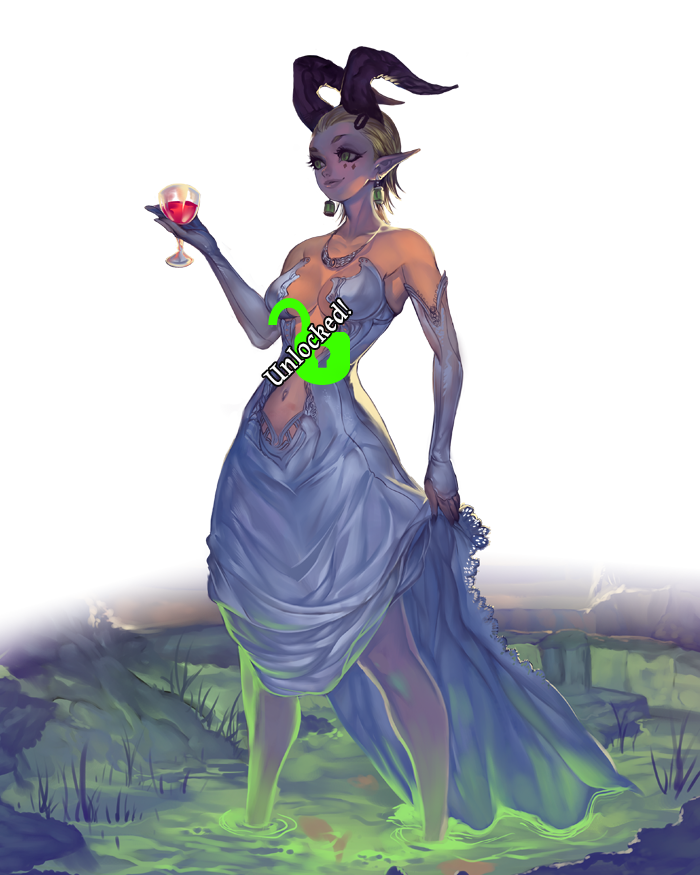 If you haven’t read her fiction already, you can read it here.

Our Nyx and Ballroom Shayliss kickstarter exclusives come with solo stories. Allowing a single player to play through a short adventure in the world of Middara as these characters.

Each one of our unlocked kickstarter exclusives comes with rules to play them as a friendly NPC, an antagonist, as well as an adventurer. 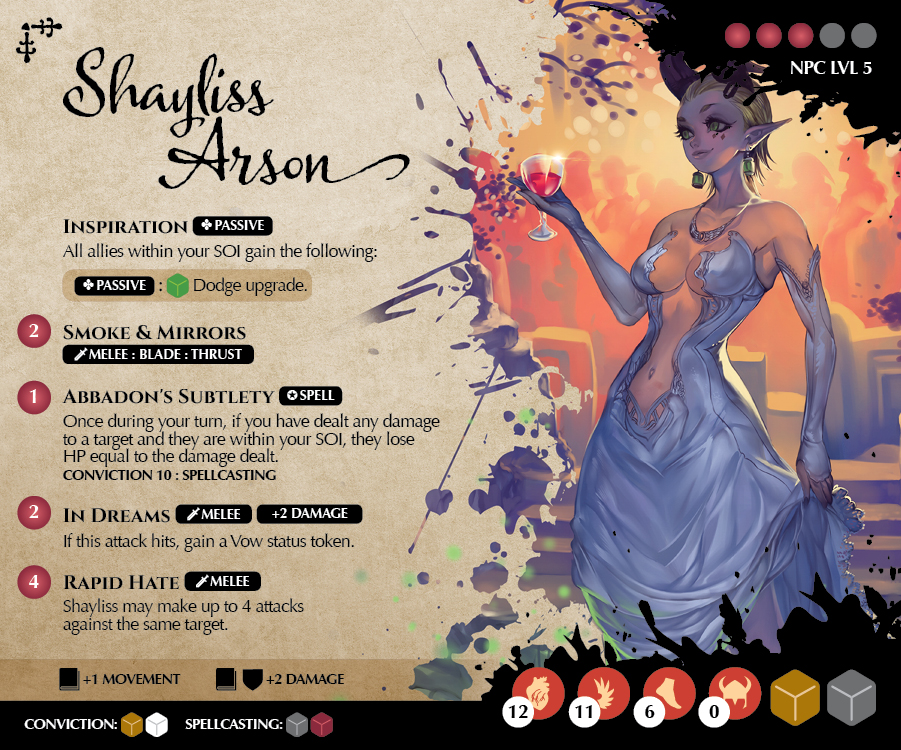 When being used as a friendly NPC, Ballroom Shayliss brings a great support ability and a lot of damage to the table. Allies who are close enough, can count on Inspiration to grant them a passive bonus to their dodge rolls.

Abbadon’s Subtlety can be used to add life loss to any of her melee attacks that have already dealt damage. If Shayliss has 5 AP at the beginning of her turn, she can use Rapid Hate to make four attacks and then follow that up with Abbadon’s Subtlety for an impressive amount of damage.

With all these awesome abilities, In Dreams is just an extra bonus to her basic melee attack that can get her a Vow Token. 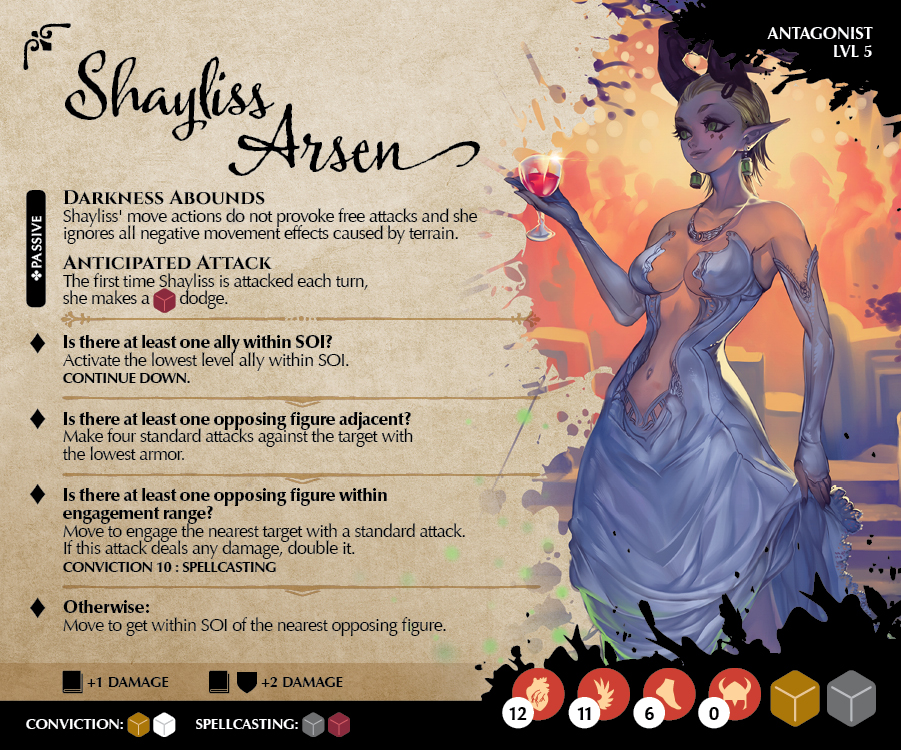 As an antagonist Shayliss has some great passive abilities. First, she gets to ignore terrain that hinders movement, and make a free dodge the first time each turn she is attacked.

If a figure is unfortunate enough to be adjacent at the start of her turn, she will attack them four times. Since the dodge action is limited to once per turn, adventurers will want to have some abilities that help them dodge more if they intend on ending their turns adjacent to Shayliss.

From engagement range, Shayliss will move up and attack an adventurer. If this attack hits, she will cast a spell that will double the damage dealt. 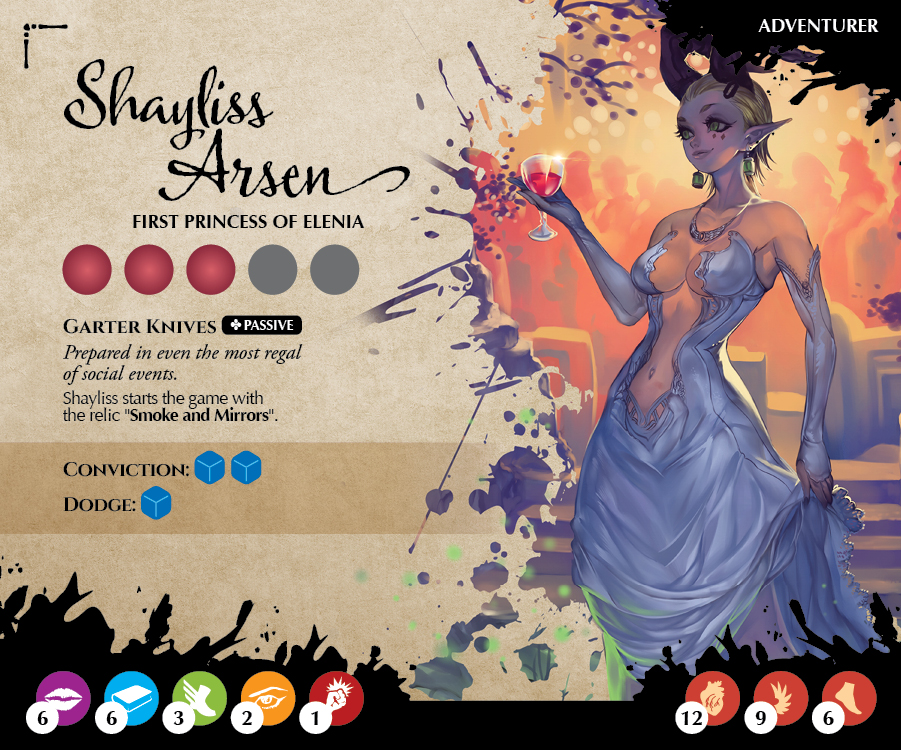 As an adventurer, Shayliss has a very exciting ability. She starts the game with a special relic called Smoke and Mirrors. This relic allows her to make a free attack once per encounter against up to two different targets at range 4.

A team in Italy, as well as a handful of backers, have committed to help us translate the games rule book and cards for a free pdf release. We are happy to see them along side the rest of the confirmed translations.

This means that we will be adding Italian to the list of sg’s for languages. With that said, at this point, we have gotten every language on board we reasonably can support at this point. Even as just free pdf’s, this will take a lot of time on our end.

We’ll be providing a list of the translators involved as well as their credentials, websites, and forums they are active on at a later date when we have gathered the information from all those involved.

We’ve been pleasantly overwhelmed with all the response from bilingual backers who are willing to give up their own time to make a better game for everyone!