We are also pleased to announce that one of our backers has written a great review over at board game geek. You can read that here! We have some other reviews hopefully going live on BGG in the next week. We will keep you updated.

Time to showcase the Gatekeeper and Living Oblation mechanics. In this update we will go over how these monsters fight and how they are beaten. Just a heads up though, these monsters are subject to change for the final product based upon our play testing experience with them. 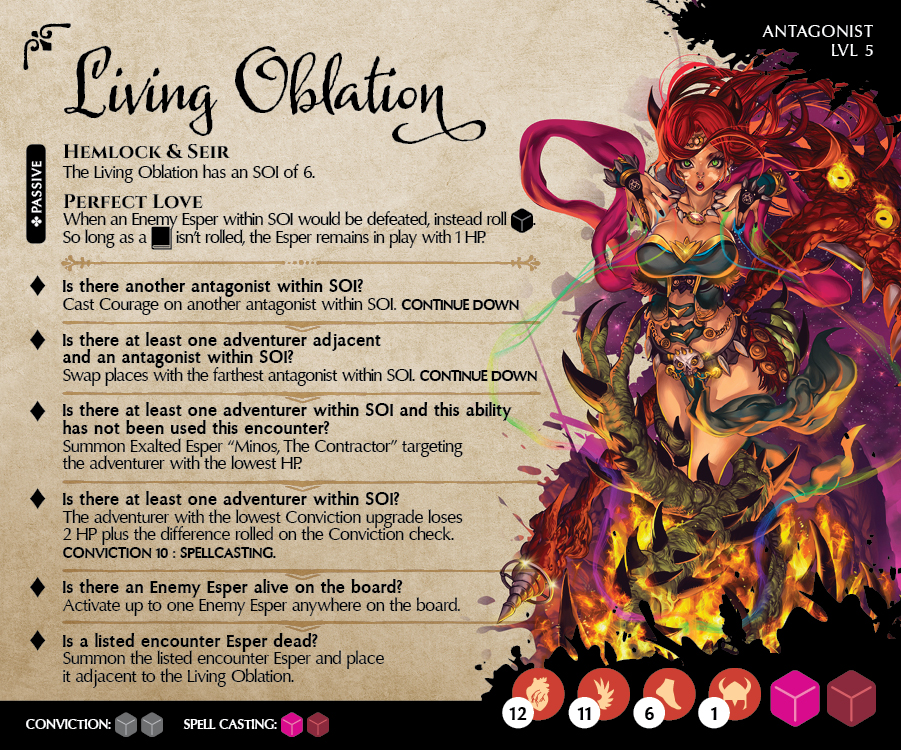 Basics:The Living Oblation provides a quick ramp in difficulty for new players. She is hard to kill with spells and will tend to stay at a distance when confronted with melee weapons. She is not only a solid support character, but also a very deadly spell caster.

Passive Abilities: Her first ability allows her to increase her SOI to 6. This allows her to out-range most spellcasting and ranged weapon builds. In addition, when an esper she controls would be killed, she can keep it alive 33% of the time.

Action Breakdown: She opens up by casting Courage on another antagonist. This beneficial status effect is considered by many of our play testers to be one of the best in the game. It provides antagonists with the ability to generate extra damage when making attacks. It’s highly advisable that adventurers dispel this effect on heavy hitting antagonists as quickly as possible. Abilities like Soul Clear can do this with as few as 2 action points.

If an adventurer happens to be adjacent, the Living Oblation will attempt to swap places with another antagonist within her SOI. This can be up to 6 spaces away. Since only moving away from adjacent spaces provokes a free attack, this doesn’t count as movement on behalf of the Living Oblation, meaning that an adventurer wouldn’t get a free attack against this movement.

Then, assuming she hasn’t already, the Living Oblation will summon an exalted esper on the adventurer with the lowest vitality. This can’t outright kill an adventurer with full HP, but it can do some serious damage.

Weaknesses: Typically, in an encounter, it would be in the adventurers’ interest to kill her as soon as possible, but her ability to cast spells at range 6 coupled with her ability to teleport away can make this difficult without the proper abilities. In addition, she’s all but immune to spells that target her. An adventurer will want to get in close while hopefully dragging those around her away from SOI 6. Or, lock her down with an item that causes paralyze without a conviction check.

Milieu: We added the lore for the Living Oblation here!

Next let’s go over the Gatekeeper. 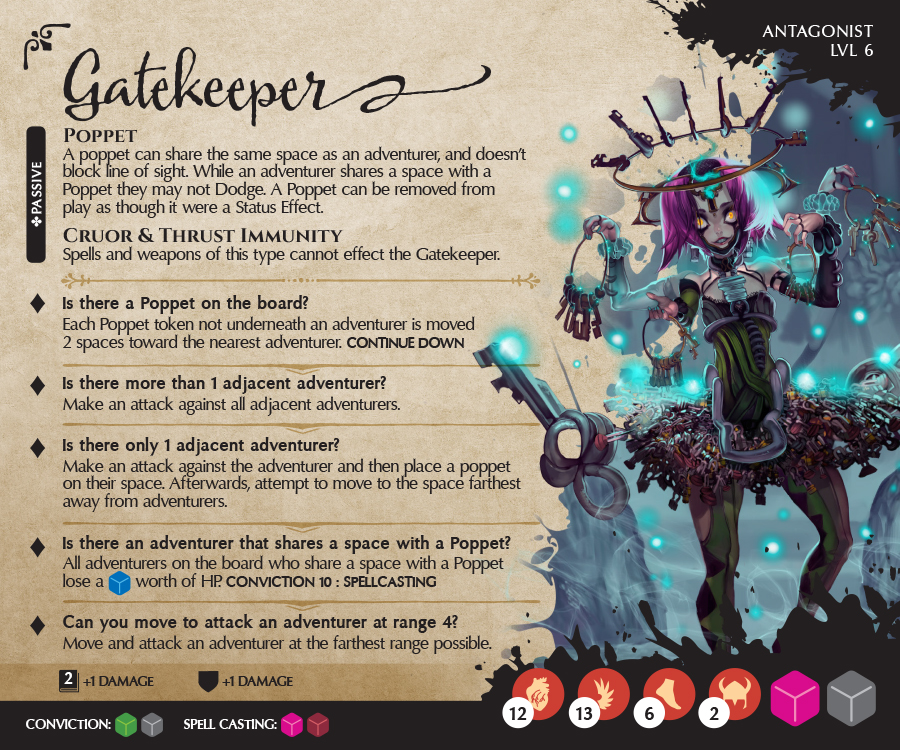 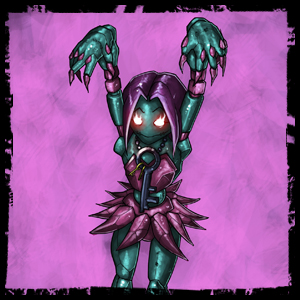 Passive Abilities: The first listed passive is really just the rules for her poppets that she brings to the board. The second one grants her immunity to Cruor abilities and thrust weapon. In Midddara, we have two types of resistances on antagonists, resistance and immunity. Resistance just means that an adventurer cannot add symbols when making an attack against them. Immunity however, means that a weapon or spell of this type cannot deal damage or cause life loss. This means, that when fighting a Gatekeeper, adventurers will want to have diversified a bit.

Many weapons in Middara do contain multiple tags. Gun blades are an example of a weapon that can contain more than one tag, allowing players to bypass some of these resistances and immunities.

Assuming no adventurer is adjacent, and an adventurer shares a space with a poppet, she will cast a spell that hits all adventurers standing on poppets. Middara typically doesn’t have spells that do any sort of AOE, so this is considered to be pretty powerful within the balance of the game. In addition, the Gatekeeper has an incredibly high spellcasting dice for her level, this means that the conviction check required to avoid this damage will, on average, be higher than 10.

If the Gatekeeper had nothing she could do, she will attempt to move and make a ranged attack at range 4 against an adventurer.

Weaknesses: Her inability to do much when pinned down by two adventurers is your ticket to killing Gatekeepers. Having two different adventurers attacked once each turn is much better than the alternatives on her list. And immunities aside, she has no recourse to protect herself against melee or ranged attacks. Spells however, like the Living Oblation, will bounce right off her most of the time.

Milieu: We added the lore for the Gatekeeper here!