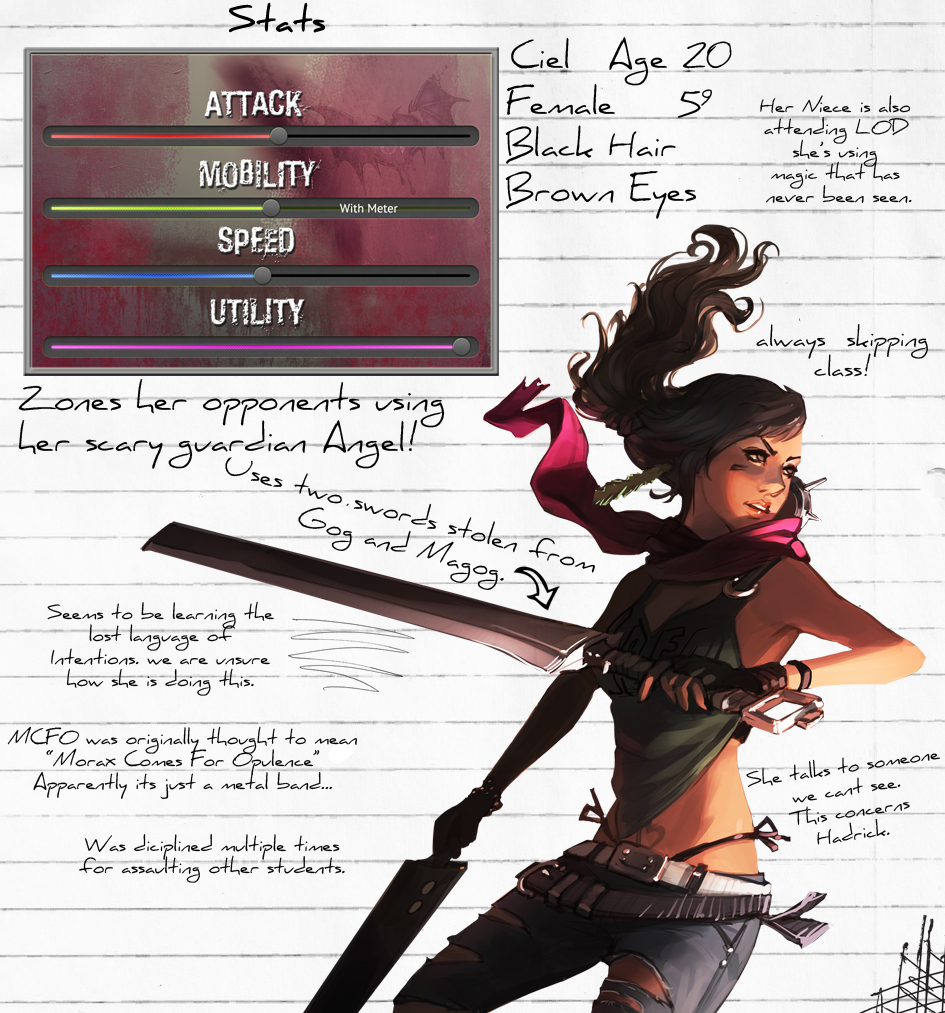 Ciel requires finesse and a great deal of planning to execute her move set properly. With only a hand size of four having the right cards in hand can be troublesome. However, she is one of the only characters in the game that can set up a complete checkmate against her opponents through positioning alone. Even without meter, Ciel can be a very dangerous opponent if she gets herself and her Guardian Angel Sean into the proper positions. As the second best zoner in the game, Ciel specializes in putting her opponent where she needs them before pummeling them into the dirt. The key to her victory lies in getting Ciel away from her opponents while keeping her Guardian Angel Sean adjacent to them. While this may seem difficult to master, a player who pulls it off is certain to be strongly rewarded.

Players choosing Ciel will find she has no guaranteed setups or damage without proper positioning. Characters with a lot of mobility can outright counter her capability to use her abilities effectively. However, even Ciel can make this a non issue with enough meter. Her low hand size limits her ability to always pull off her big combo’s so players will want to rely on pot shots and hit and run techniques. Another limitation is her lack of any ranged attacks. She relies on her opponents being adjacent to Sean to do the damage. If they get away from him and have ranged abilities Ciel is going to be in trouble.

Ciel is great for players who love to see the fruits of their patience and smart plays.

An unfortunate upbringing and troubled past left Ciel and her older brother alone as children. Eventually overcoming terrible odds, they pulled themselves off the streets, working hard to make new lives together. After his life was taken by illness, Ciel promised to protect his new wife and daughter with her life. So when their home was attacked by dark creatures, Ciel was fully prepared. By the time the Erelim showed up, Ciel had already massacred the monsters. When they revealed that the monsters had come for Ciel’s young niece, Tiffany, because she’d been chosen to attend the school of Lod, Ciel took up the monster’s weapons and refused to let them take her. It wasn’t until the Erelim agreed to let Ciel and her sister-in-law escort Tiffany to the school that she finally agreed to their terms. With a burning desire to protect her family, Ciel took full advantage of the opportunity to prepare herself against these new found occult threats.When a strange new power manifested during her training, she began to realize she was the one who was still being protected. During her skirmishes a strange ‘being’ would manifest and fight alongside her. Though many at the school were skeptical about the origins of this apparition, Ciel knew that it was her brother, keeping his own promise to protect her, even in death.

Ciel and the Twin Monsters