Hey everyone! We wanted to keep showing off mechanics in the game while the rule book comes along. While we’ve shown the following items before, plenty has been tuned over the last 12 months. So we felt it was worth showing it again. Below you will find the Combatant cards for the Living Oblation and Femke & Diem.

Each Combatant card is double sided. One side has the Intelligent version. This side is used when the players want to play the game fully cooperative. The other side has Command version, this is the side that players use while playing against a player in our Badman Variant.

If you find any problems with the cards please let us know. Mechanically these cards are considered done, however, we are working hard to get rid of spelling errors. But still point out any irregularities you notice. Sometimes we know how they are supposed to work because we’ve play tested so long. This can easily cause problems when play testers stop reading the cards.

First, you’ll notice we made some artistic changes from the old version. Other than aesthetic and small tags, we added some boxes to the top of the card. This is to keep track of status effects and damage that has been dealt to the figure. In the case of the Living Oblation, there is only ever one on the table. But some of our other combatants can come in groups as large as 6. Right now, each figure on the board will have a way to identify them numerically. Right now we’re working with our manufacturer to come up with the best solution at the best price. 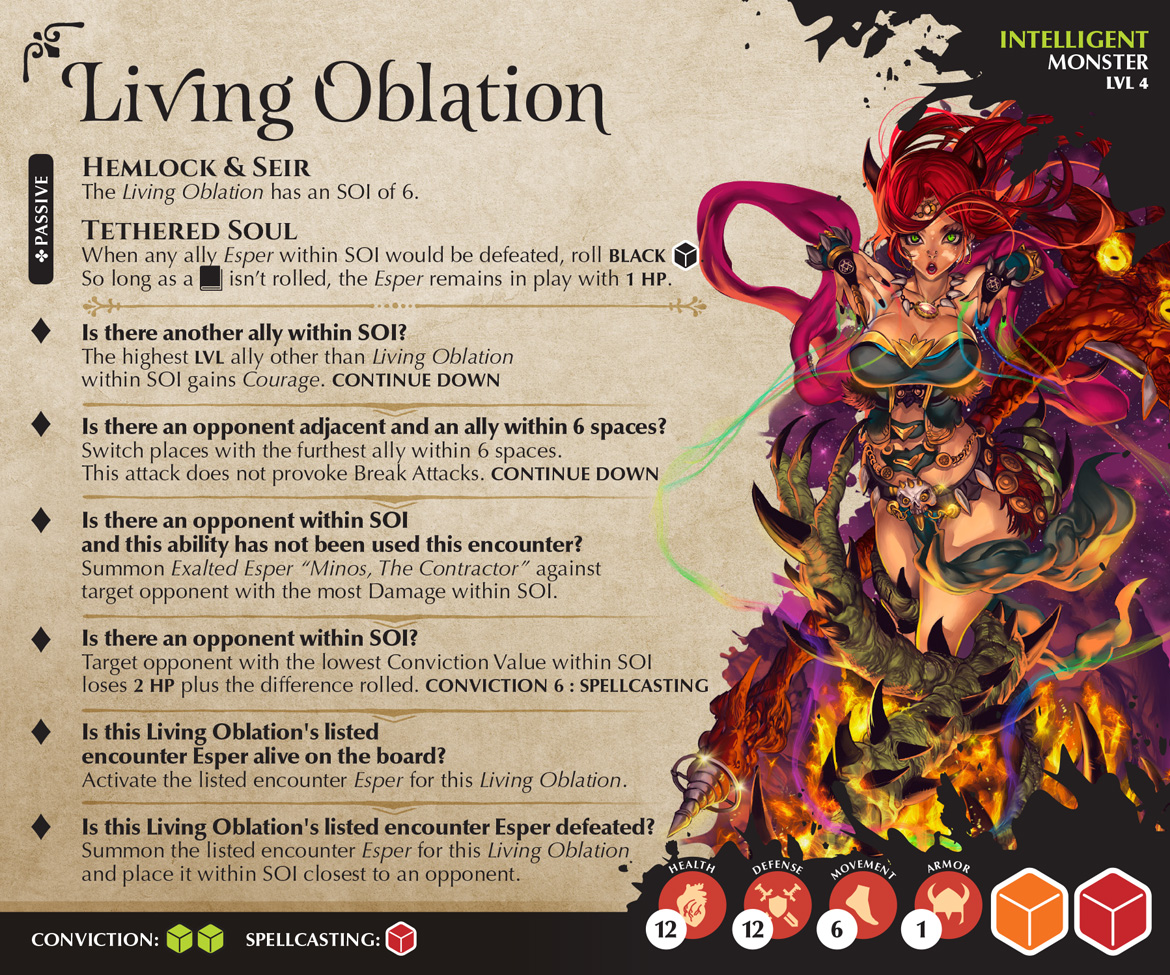 Basics:The Living Oblation provides a quick ramp in difficulty for new players. She is hard to kill with spells and will tend to stay at a distance when confronted with melee weapons. She is not only a solid support character, but also a very deadly spell caster. In most encounters that feature the Living Oblation, she starts with an Esper on the board with her. This Esper changes from encounter to encounter to scale the difficulty based on what stage of the campaign or crawl mode the players are in.

Passive Abilities: Her first ability allows her to increase her SOI to 6. This allows her to out-range most spellcasting builds and puts her on par with most ranged weapon builds. In addition, when an Esper she controls would be killed, she can keep it alive 33% of the time.

Action Breakdown: She opens up by casting Courage on another antagonist. 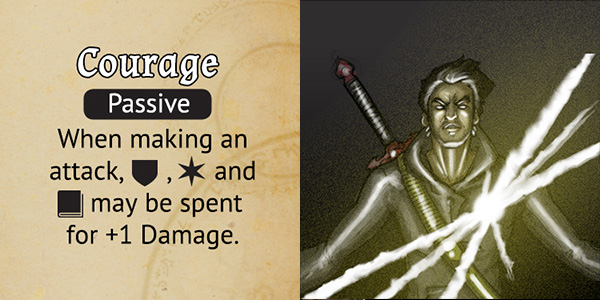 This beneficial status effect is considered by many of our play testers to be one of the best in the game. It provides figures with the ability to generate extra damage when making attacks by spending any symbols they roll to add 1 damage. It’s highly advisable that adventurers dispel this effect on heavy hitting antagonists as quickly as possible as it can add a considerable amount of damage very quickly.

Abilities and Equipment can remove Effects  relatively easy, but due to the nature of our game, you could simply choose not to take any abilities or equipment that can remove effects. 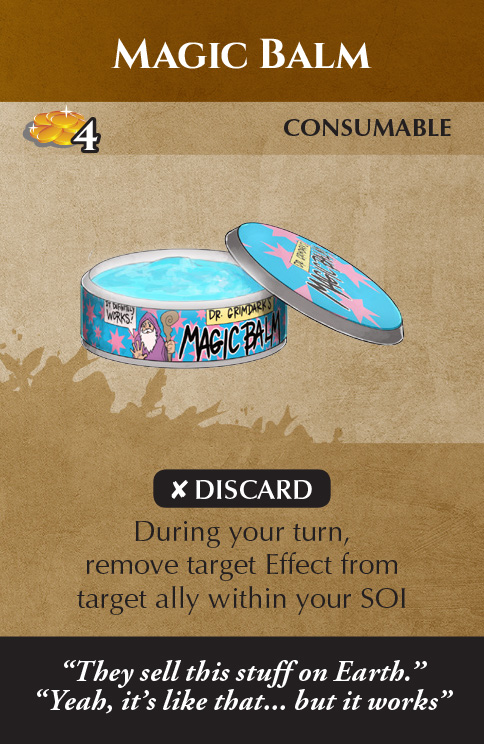 If an adventurer happens to be adjacent, the Living Oblation will attempt to swap places with another antagonist within her SOI. This can be up to 6 spaces away. This ability specifically states that it doesn’t provoke Break Attacks.

Free attacks have been listed a couple ways in past updates. We’ve gone back and forth on this for a long time and have come to the funnest conclusion. A Break Attack is a free Standard Attack that is limited to once per turn. It can be made anytime an opponent moves out of an adjacent space for any reason. This means that figures who move out of a space that is adjacent to multiple figures will be attacked multiple times for free. The Living Oblation’s ability is a movement ability that specifically states that it doesn’t trigger Break Attacks.

Then, assuming she hasn’t already, the Living Oblation will summon Minos the Contractor on the adventurer with the most Damage. This can’t outright kill an adventurer with full HP, but it can do some serious damage. 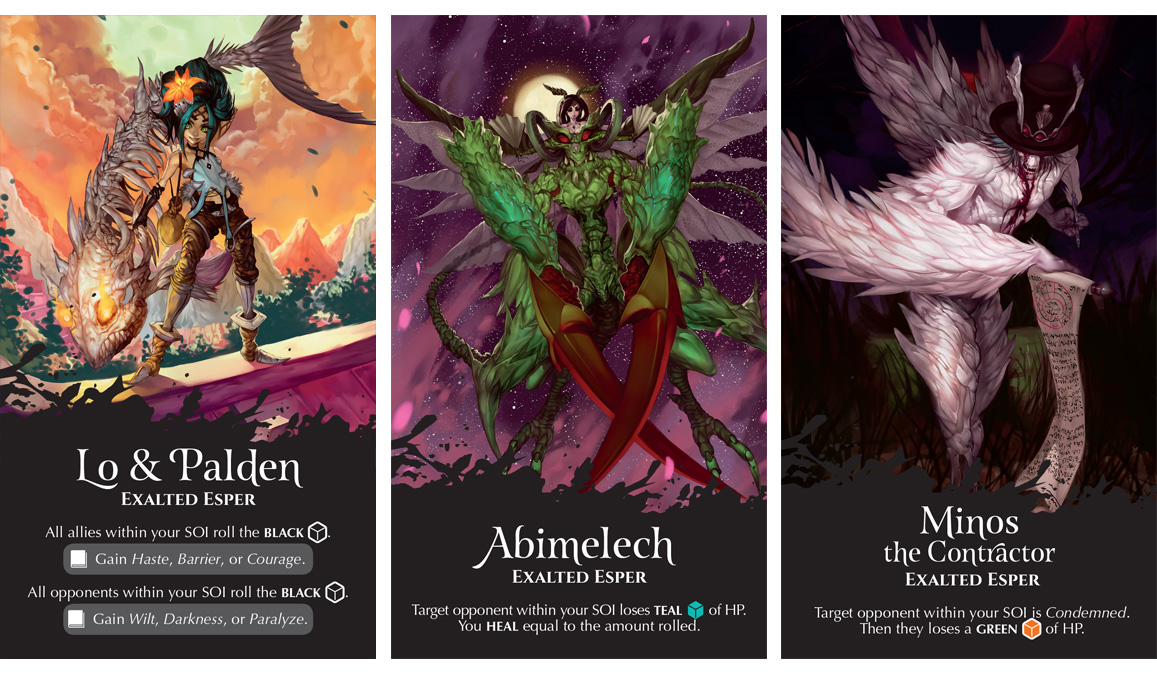 Weaknesses: Typically, in an encounter, it would be in the adventurers’ interest to kill her as soon as possible, but her ability to cast spells at range 6 coupled with her ability to teleport away can make this difficult without the proper abilities. In addition, she’s got a great Conviction Upgrade for her Tier and is very difficult to hurt with spells. An adventurer will want to get in close while hopefully dragging those around her away from SOI 6. She’s also particularly squishy for her Tier. It doesn’t take a very hard hit to remove her from the board.

Milieu: You can read the lore for the Living Oblation here!

Command Side: We decided we wanted to show off the Command versions too. Below you can see what options the Badman would have playing the same encounter. 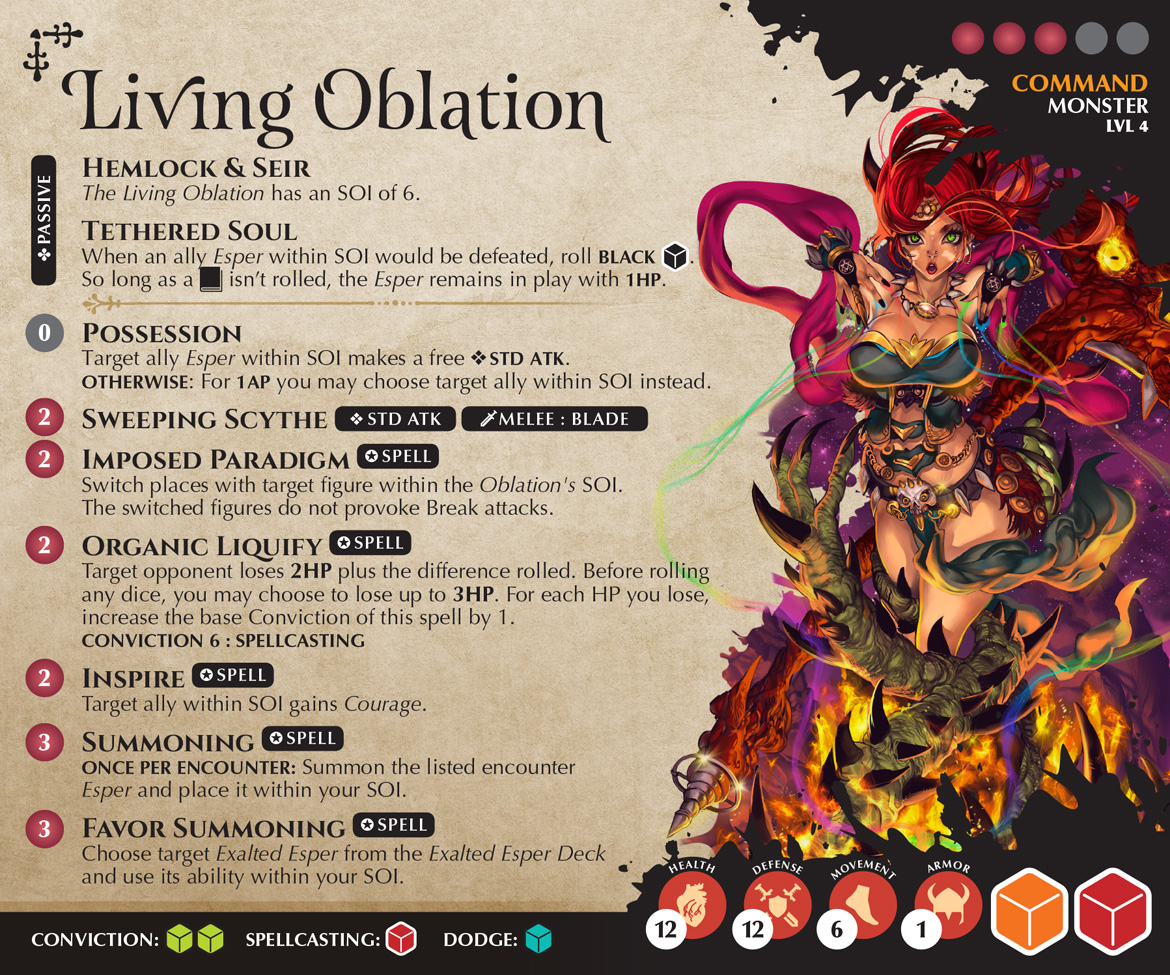 Lets talk quickly about an Esper that both players and the Living Oblation can summon. 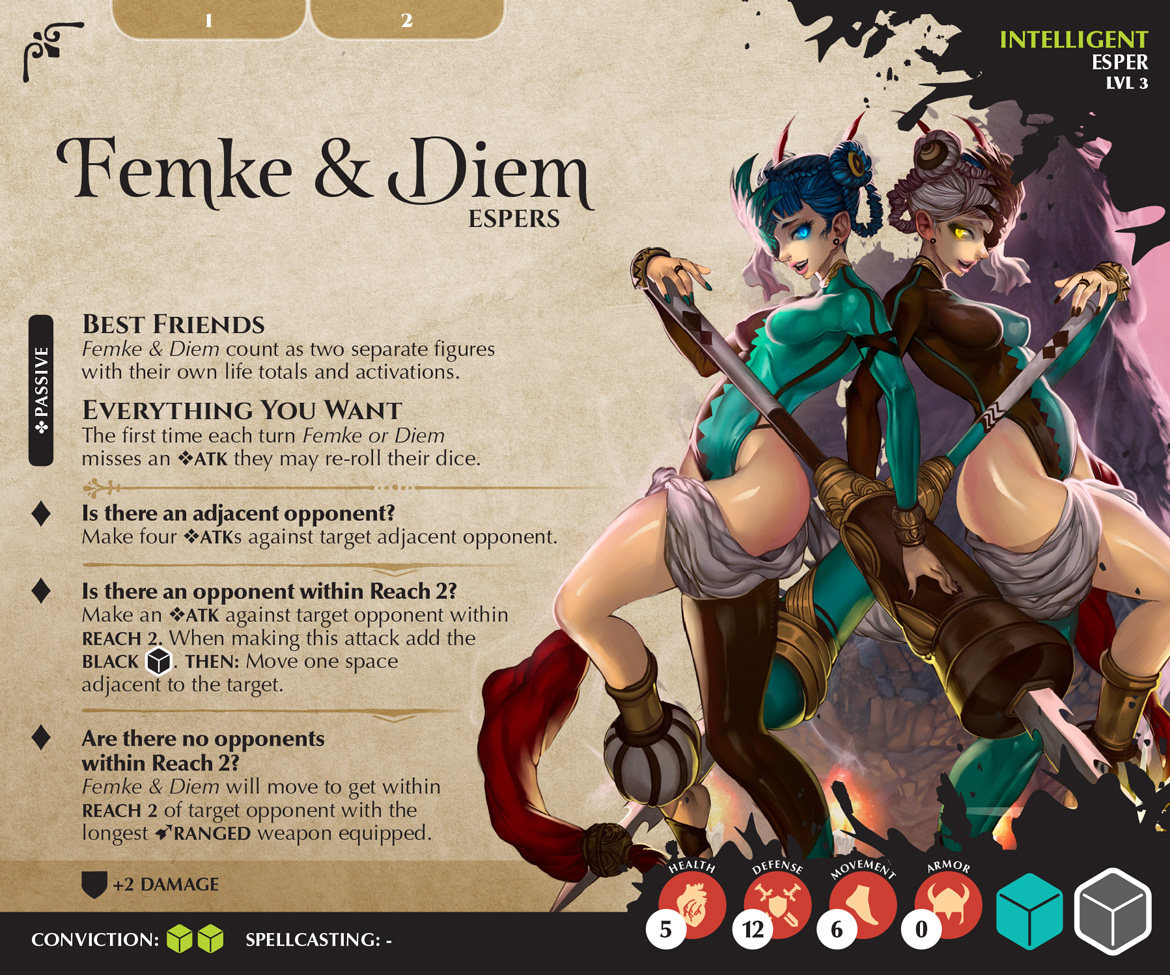 Basics: Femke & Diem are two separate figures on the board that have one initiative card. These two figures can be brought to the board by Living Oblation and players with the Summoning ability. They are glass cannons who can hit hard and fast but are limited to melee attacks. The Intelligent version of their Combatant card will focus adventurers with the longest ranged weapon.

In Middara, when the turn starts for any Combatant with two or more figures on the board, these figures activate one at a time starting with figure that has the lowest number marker on it. The encounter determines which figure is marked with which number.

Passive Abilities: The first ability listed is a passive that denotes that even though they have one card, they have two separate figures. While this is assumed in the case of all monsters, Esper are only ever summoned one at a time. This is the exception to the rule.

Second, Femke and Diem get to each re-roll the first attack that misses each turn.

Action Breakdown: If Femke or Diem start their turn adjacent to an opponent, they will attack them four times. Since players are limited to 1 dodge action a turn,  this onslaught of attacks is very difficult to live through early game. However, there are abilities that grant additional free dodges, and armor goes a long way to offset this damage.

If she isn’t adjacent, but within 2 spaces of an opponent, Femke or Diem will attack an opponent within Reach 2. When she does she’ll empower this attack using the black dice in an attempt to add up to 2 additional damage. Afterwards, she’ll move adjacent to the target she just attacked. This movement can provoke Break Attacks depending on the positioning of your teammates.

Weaknesses: Femke & Diem have very little HP. They die easily if you can hit them. They’re also susceptible to spells and their affects. It’s easy to prioritize other opponents on the table, but doing so could easily get you killed by them.

Command Side: This is the side that a player would use when summoning Femke & Diem as an adventurer or as the Badman. 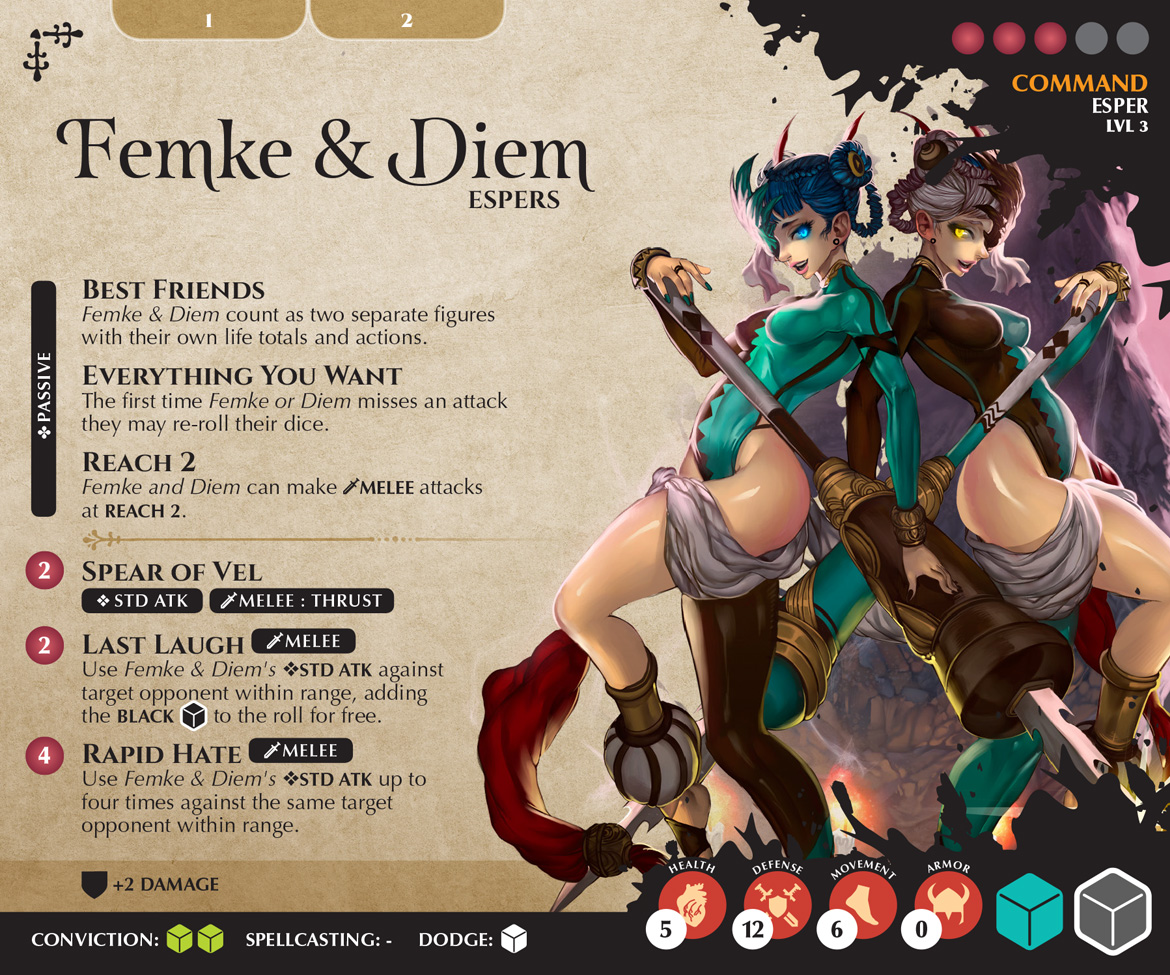 Thanks for taking a look. We’ll be showing off more next week.