Our sixth antagonist has been unlocked! Go check out our kickstarter! 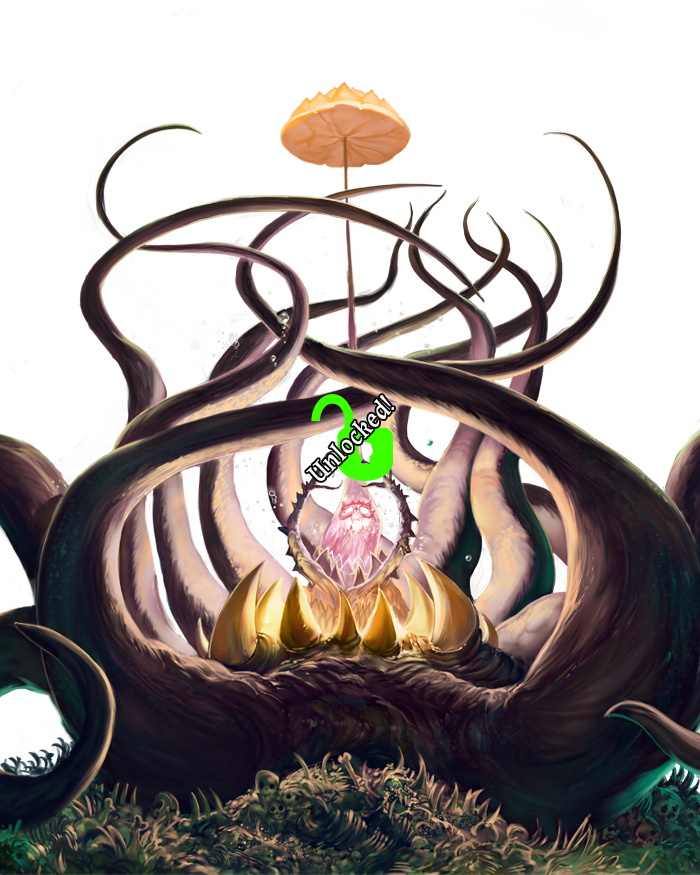 You can read the Corpse Collector fiction here. 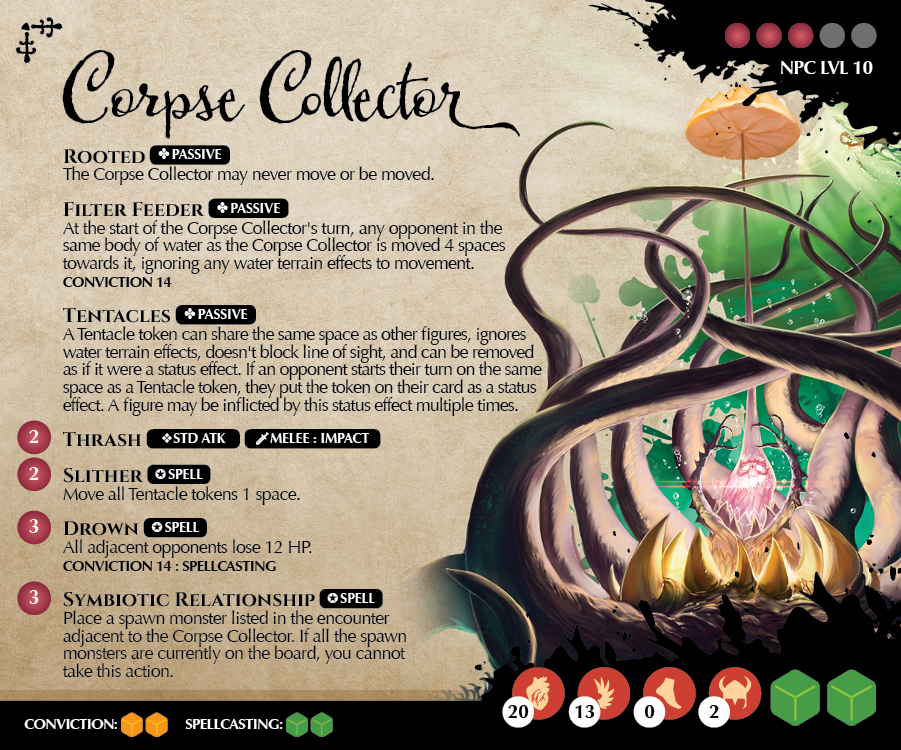 The Corpse Collector is an underwater danger that poses a threat to anyone in water squares. It has a passive ability that sucks adventurers towards it with alarming speed so that it can devour them with its large teeth. Filter Feeder and Tentacles are passive abilities that suck opponents towards the Corpse Collector. Filter Feeder automatically pulls opponents in the same body of water as the Corpse Collector at a whopping 4 spaces per turn unless a Conviction 14 check is passed. The Tentacles passive describes the rules for the Tentacle tokens. 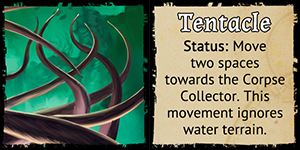 The Corpse Collector also has several active abilities that are unpleasant to deal with. Slither is the ability the Corpse Collector uses to reach out its ranged tentacles to drag opponents into melee range so that it can use Drown or it’s standard attack. Drown is close range ability that hits really hard. All adjacent opponents lose 12 HP unless they can pass a Conviction 14: Spellcasting test. This will defeat most adventurers immediately. 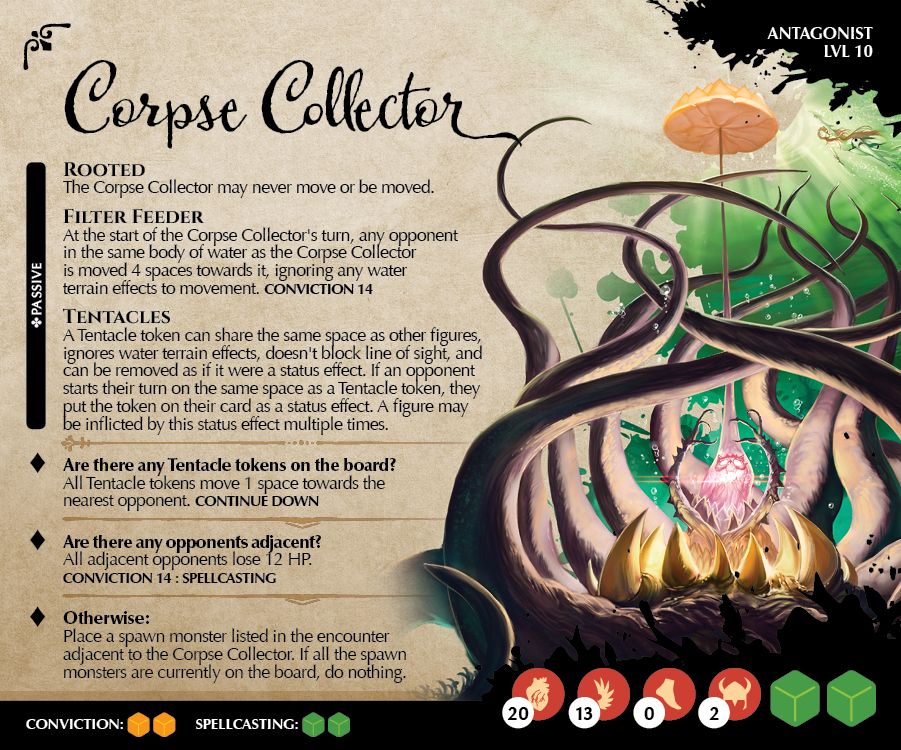 Basics: The Corpse Collector is a passive creature that is stuck in water, but it also calls forth monsters to fight with it against the adventurers. In addition, it will use it’s tentacle tokens to pull adventurers near it so it can use it’s most powerful abilities.

Passive Abilities: The Rooted passive ability prevents the Corpse Collector from moving or being moved by any means. It is completely stationary and cannot be pulled from the water.

During the encounter setup, the Corpse Collector starts with Tentacle tokens on the board. Once a tentacle token has reached the same space as an opponent, the target is in trouble. When an opponent starts their turn on the same space as a Tentacle token, they put the token on their card as a status effect. And due to the Tentacles passive ability, they can be afflicted with this status multiple times. Once they get this status effect on their card, they are pulled two spaces towards the Corpse Collector at the start of each of their status phases. One of the hardest parts about its tentacles is that they are not restricted to water the way the Corpse Collector is and can move as far on land towards its opponents as needed.

Action Breakdown: The first order of business for the Corpse Collector is to get opponents in melee range. If there are any tentacle tokens on the board, they automatically move one space towards the closest opponent. Next, if there are any opponents adjacent to the Corpse Collector, they lose a huge 12 HP unless they can pass a Conviction 14: Spellcasting test. Ouch.

The spawned monster’s initiative card is added to the end of the initiative track and will then act according to its normal antagonist card.

Weaknesses: There are two strategies when battling a Corpse Collector. What strategy players choose will depend heavily on the abilities and equipment the players have chosen to arm themselves with. The first would be to avoid the water and tentacles as much as possible. The Corpse Collector is immovable, and the tentacles only move one spaces per turn, so they are easy to avoid. However, if you go with this strategy you must have some well-equipped ranged party members.

The other strategy would be to run your heavy-hitting melee adventurers in straight off the bat to avoid the chance of spawning monsters. Because the Corpse Collector hits so hard, you need a hefty tank and some good damage. The Corpse Collector has two armor and a lot of health to take into consideration, so dedicating roles between attack, healing, and tanking is a viable option.

Of course, in some encounters you could always choose to simply not fight it. But typically the loot that you get from killing it will make it worth your time and effort.

BGC helping out with German translation!

Daniel over at Board Game Circus have offered us their fine services to help translate the game to German. We’re still in talks about making this happen but wanted to let our backers know that we have been taking steps to prepare for professional translation.

Many of you have contacted us in regards to helping us make translation happen. We have been collecting this information and plan on reaching out to everyone who wants to help sometime after the campaign.

When the time comes, we will find community leaders willing to help organize certain languages and their translation. If you’re interested, we are looking for those who speak any language other than English and feel confident they can help organize the translation of the game’s cards and rules.

Go ahead and send us an email if you think you would love either be part of this translation community, or even be the person who helps organize it.

Thanks for being such a supportive community!