We’re working hard to get this game to our printers by the end of February so that you can all have our awesome game by the end of the year. In the meantime, we wanted to talk about how players acquire new equipment in Middara.

Many Items in Middara are earned by spending gold that was earned during encounters. Gold can be earned in a variety of ways. Whenever players kill a monster, they earn gold. Some monsters have the Swarm tag, meaning that the entire group of monsters has to be killed before gold is earned. A few monsters have the Avarice tag, this means that the monster will drop more gold than usual if it’s killed.

Another common way players earn gold is by successfully completing Side Quests. A Side Quest is a series of optional encounters that can be embarked upon during Story Rounds. These Side Quests might be as mundane as clearing out a cave of local monsters, or even have more far reaching ramifications, such as saving the lives of other characters. In either case, players can expect the length of these Side Quests to vary anywhere from 1-3 hours long and earn them some gold and items.

In Middara, we also have Achievements. Much like their video game counter parts, these are spectacular things that players can accomplish during encounters to earn additional rewards.

Players can also earn gold occasionally through our Adventure Mechanics, or within the story itself. While this usually comes as a reward from a Side Quest, it can also be a ramification for a decision that was made.

Lastly, Middara contains good old fashion treasure chests. These are usually represented through Loot Tokens. Each Loot Token has a unique color on one side, with the other always being black. When players activate a Loot Token, they read the corresponding hidden text to see what they find inside. This method of hiding information is also how we handle trapped chests, or other story events that occur upon activating a Loot Token.

Players may only spend gold during Story Rounds, or when an Adventure Mechanic specifically says so.

During Story Rounds, players build a semi randomized store that represents what the local market has for sale at any given time. As they leave on Side Quests and return at later points, the available items will change. This means that if that ultra great sword you want is available now, it might not be later on.

The store is made up of Weapons, Relics, Armor, Cores, and Consumables that correlate to the stage of the game you’re in. As the adventure progresses, the items slowly get better, meaning that you’ll always have something new, and better, to buy. The tiers in Middara go, Mundane, Common, Uncommon, and then Rare. Above is an example of a set of two-handed weapons starting with Mundane and progressing all the way into Rare.

While some items cannot be sold, most can. Our items depreciate at a rapid rate however, and this method of getting gold doesn’t prove to be a significant source of the players income.

Since party sizes change as the game progresses, it’s important for players to consider gearing out their fellow party members, even when they aren’t being actively used.

Our design philosophy has always been to keep the carrot dangling in front of players at every buy round. To ensure that players always feel like there is something better they want.

Many Items in Middara are unique to our story, that is, they cannot be earned outside of the Adventure that the players are currently playing. Sometimes these are earned as quest rewards, and other times they are a earned by making a certain decision, or found in specific chests.

Story Items represent powerful artifacts and other lore specific items that players earn as the game progresses. For example, the Best Rice Ball In Elenia is an item that can only be acquired as part of a Side Quest. 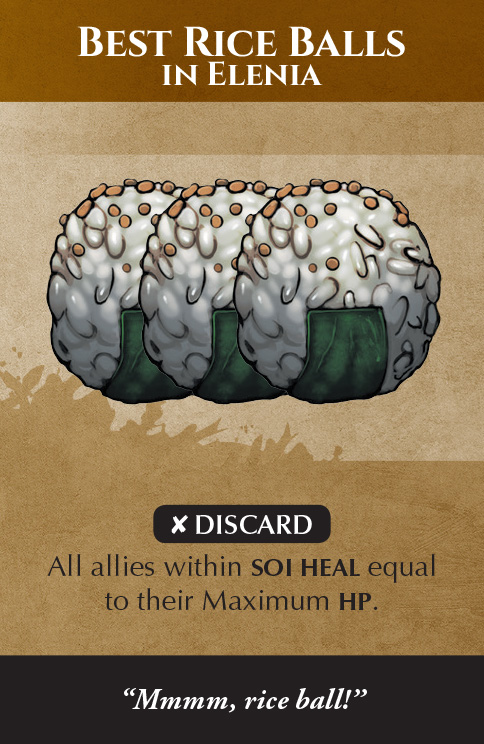 Other items have a chance of being dropped by killing specific Monsters. Every monster in Middara has a matching deck of items unique to it. We call these cards Unique Items. These Items represent Items that can be made either from the monster itself, or even just taken. For example, the creature below is called a Gatekeeper. These girls pull at the strings of their magical poppets to both channel their magic and deal damage from afar. If a player killed a Gatekeeper, and drew the Unique Loot Card, they could earn one of her available Unique Loot cards. One of the unique loot cards you can earn from a Gatekeeper is one of her very own Poppets.

That’s it for this week! Thanks for checking our updates.