Yes. However, you only add a single purple die. If you have chosen multiple targets to attack with Murder Circus, you may only choose one target to deal the additional damage to.

Can I re-roll a die that I already re-rolled?

Can Whirlwind be used with Bring the Wrath?

However, the intent is that Bring the Wrath requires you to end all current Abilities and Actions to make an Attack. Since Whirlwind is an Ability, you could use Bring the Wrath but it would end any further Actions granted by Whirlwind.

Can you have an Item with 2 HEAVY tags on it?

If you upgrade a HEAVY Item so that it gains a second instance of HEAVY you will have two separate instances of HEAVY.

Can you use FU Abilities during a Counter?

Counter gives you an Attack. This Attack counts as a normal Attack for all rule purposes. However, it’s important to remember that you cannot use Abilities when it is not your turn unless the Ability specifically says otherwise. Symbol Abilities specify when they can be used and thus can always be used during a Counter. Disciplines on the other hand might or might not be able to be used depending on their Text Conditions. 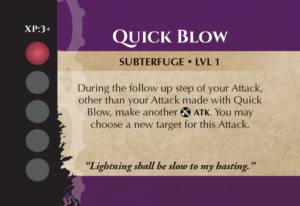 Do abilities that reflect damage work even if the attack being reflected caused me to become defeated?

Yes. Any Ability that occurs when damage is dealt happens before any figures are defeated.

Does Reach Increase the range of Break Attacks?

Does the Relentless tag Ignore the Heavy or Hulking tag?

If a spell has more than one target do I roll my casting dice multiple times to determine a force for each target?

Unless the ability specifically says to determine a force against each target, you should always determine the force of the spell once.

I.e. Each target will make a separate conviction check against the same force value.

If an Ability says that it can be used on “Another ally” what does that mean exactly?

When an Ability is intended to be used on any figure including yourself it will say “Any ally/figure/opponent”.

When an Ability is intended to be used on any figure except yourself it will say “Another ally/figure/opponent”.

If I Counter a Break Attack during a Move Action, can I continue moving after resolving the Counter?

Countering gives you an Attack Action. This would normally end the current Action. However, Break Attacks are an exception to this rule. The Break Attack Rules on PG. 44 specifically say:

“Unlike other Actions, a Break Attack and resulting Actions will not end the movement of the figure that is moving. Any remaining movement may be finished after the Break Attack ends”

If I use REACH to attack through an ally do I still get the -1 penalty as though it were a ranged Attack?

Is the damage reduction from Resistances applied before or after Armor?

The Damage from Resistances and Immunities is applied when Calculating Final Damage.

When redistributing HP with the Discipline Soul Steal does it count as Dealing and being Dealt Damage?

Are Water Loas and Merk Hounds affected by Currents?

Does the Merk Hound’s Ability “Sticky” apply to figures that are on different levels of Elevation?

Does the Merk Hound’s Sticky ability interrupt my movement?

No. If you did not start your movement next to a Merk Hound, then you can still move pass them without ending your movement.

How do you count spaces to determine Nearest and Farthest?

Intelligent Combatant cards will sometimes reference Nearest or Farthest. When determining what is Nearest and what is Farthest players should count out the number of spaces, counting diagonally if necessary, to the target figures or spaces. The nearest space to a figure is always an adjacent space. This counting is done at a at 1 for 1 conversion and does not follow the rules for Movement, Range, or SOI. Instead, simply count the shortest path to any non-obstructing terrain spaces.

The Merk Hounds special ability Submerged says that it can only be targeted by adjacent enemies. What does that mean exactly?

While the Merk Hound is in Water or Muck, only Adventurers who are adjacent to a Merk Hound may draw Line of Sight or SOI to it.

What does it mean when a Special Encounter Rule states that the figure follows the rules of an Adventurer even though they use a Combatant card?

It means that any time a rule references an Adventurer it applies to that figure as well. It also means that they have a pack with a size of 3. Otherwise, they follow the rules of a Command Combatant. See Pg. 52 in the Rulebook.

If a figure is inflicted by Wilt do they take extra damage from being knocked into a wall?

No. The wall is dealing the damage.  Wilt only adds damage to damage dealt from attacks.

No. The wall is dealing the damage. Vow only adds damage to damage dealt from your spells and attacks.

Can you half or double damage twice?

Nope. If one or more effect would double or half the damage from a single attack or spell action, you only apply one modifier.

Can you heal or take more damage than you have?

Do I round up or down?

When players must round any number, they always round up.

How does AI determine who to Attack if the target is a Swarm Monster?

In these cases they target starting  with the lowest number available to attack first.

(I.E. If AI is instructed to Attack a fellow Cave Sickle, it will Attack Cave Sickle 1 first, followed by 2 if Cave Sickle 1 is either dead, not on the board, or is in fact the figure making the Attack.)

What happens if a hidden or special rule references and requires a figure on the board that is no longer alive?

Ignore the special rule or any of the flavor text. None of the events transpire as the figure has since passed away.

What happens if a Totem/Special Rule/Ability requires me to spawn or place a figure and their is no legal space available?

If an Adventurer were to succumb to this via a strange concoction of abilities (Such as having their flight being canceled while they are currently occupying a space shared by another figure) they must place their figure on the nearest legal space they’ve already been in this turn.

What happens if a Totem/Special Rule/Ability requires me to spawn or place a figure on Dangerous Terrain?

Anytime an AI, Special Rules, or something controlled by the game and not Adventurers instructs you to spawn a figures on Dangerous Terrain, place them on the nearest legal space that is not Dangerous Terrain.

What happens if an Item combination I have equipped becomes illegal?

If for any reason you’re equipped weapons or Items can no longer legally be equipped according to the rules, you must immediately un-equip Items until your current load-out is legal.

What happens if I need to draw a Reward or Card and there is no more components left to draw?

As per our component limitations section of the Rule Book, you would not draw the Reward or Card. Thematically it’s an empty chest or the loot really didn’t drop.

What happens when two End Conditions happen at the same time?

If you want an easier experience, take the End Condition of your choice. Otherwise, take the Lose Condition.

When are Unique Items for sale and how do they interact with the rest of the Adventure?

You add 1 Unique Item during a Story Round. If you purchase that item, you will not draw another until the next (different) Story Round in the Adventure.

So, if you return to the same Story Round and you’d already purchased the Unique Item that was for sale, then you will not have a Unique Item available to purchase.

Lastly, if you don’t purchase the Unique Item and you end up drawing a Unique Item during a future Encounter you will not shuffle that Unique Item in as one of the options as it is still for sale back at the store.

Do Break Attacks happen from any type of movement or just the Move Action?

Break Attacks trigger when a figure leaves any space adjacent to an opposing figure. This can trigger from any form of movement such as during a jump, free movement, or even currents.

If something would move me out of a space but I cannot move for whatever reason (There’s a wall in the way, my character has the heavy tag, etc) do adjacent opponents still get break attacks?

When Jumping, do I have to count spaces out in a straight line?

Jumping still follows normal movement rules, other than it ignores Effects from all Terrain other than Obstructing Terrain. This means that you can count out the spaces in any pattern you’d like before you decide to make the Jump Check.

Example: Both Jump Checks from A to B or from C to D would be legal. 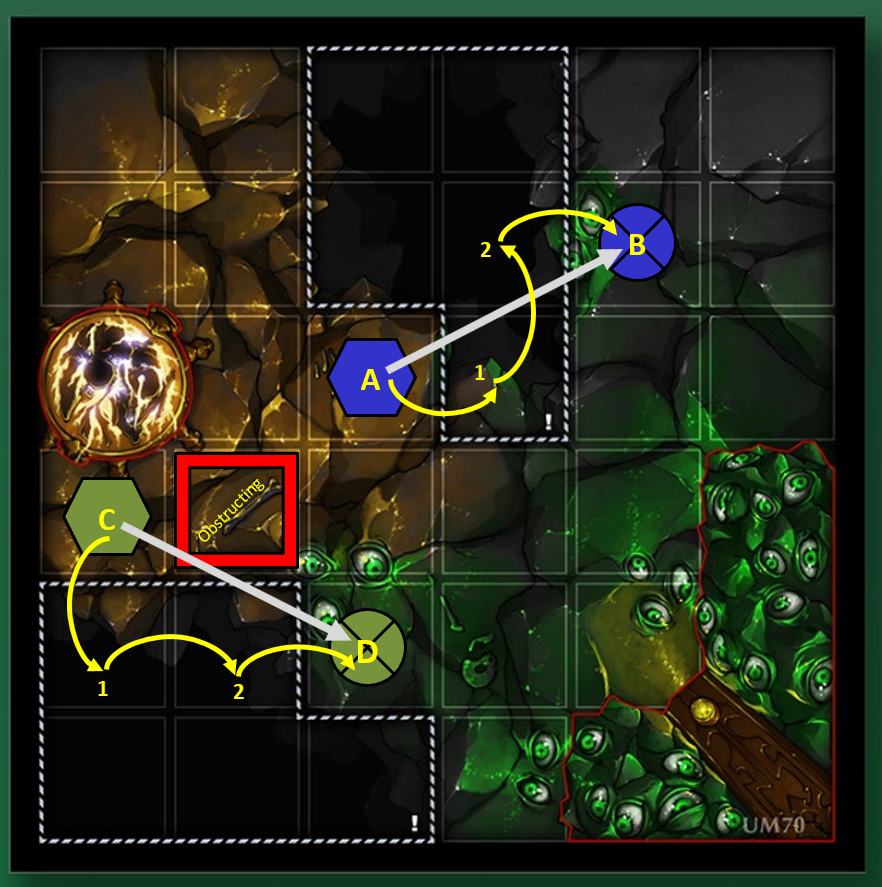 Are Terrain tokens ever affected by the “current” rules?

No. Any Terrain Tokens added to the board never have a current added to them, and will not be moved by currents. Unless stated otherwise, Loot tokens, and Combatant Tokens are the only tokens affected by currents.

Does a figure attacking another figure on lower Elevation ignore Hindering Terrain?

No. Figures Attacking another Figure at a lower Elevation ignore both Opponents and other Allies, but not Terrain.

If a Combatant dies via Dangerous terrain do I still gain Combatant Loot?

If I share a space of Hindering Terrain with a token, do attacks I make against that token count as being made into hindering terrain?

Yes. In rare cases, you can attack something in the same space as you. The target gains all the benefits and detriments that the Terrain provides.