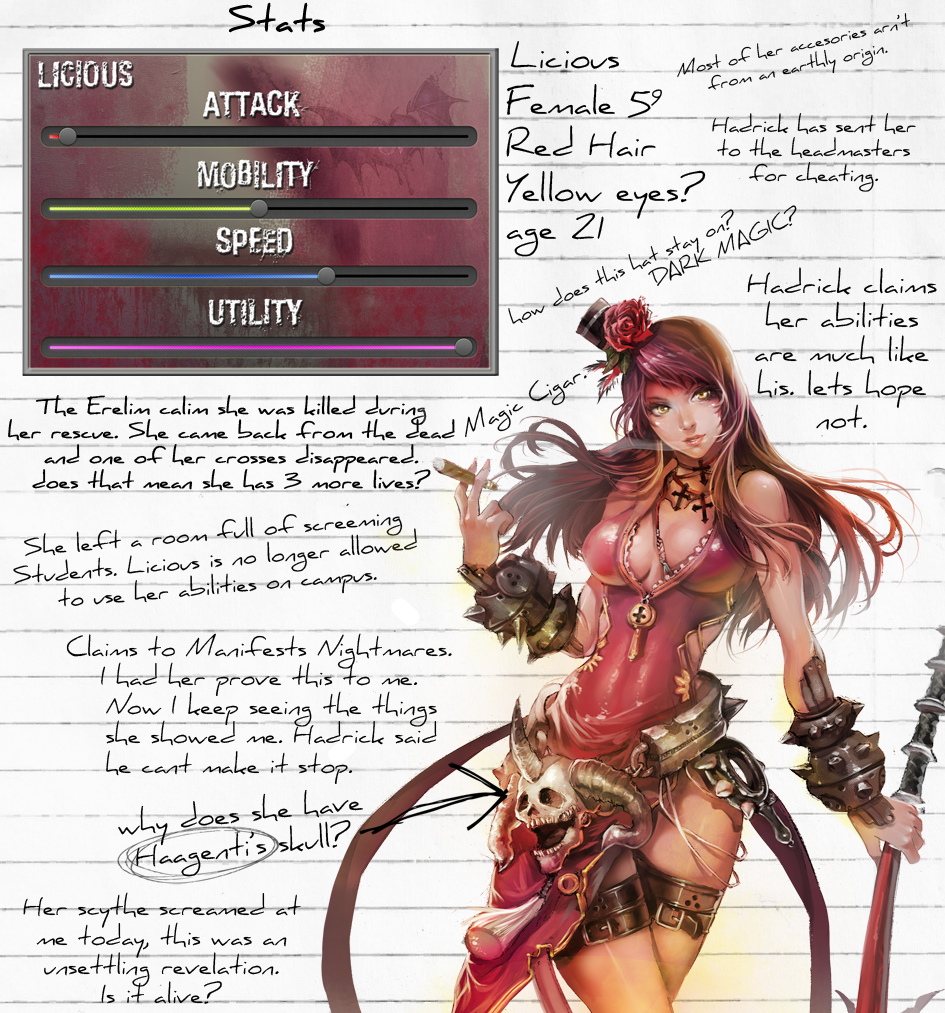 Licious is fast, mobile, and capable of hitting targets within two spaces on almost every card. She’s the only character in the game who has a combo limit of 5, allowing her to pull of some big combos. She can generate meter faster than most characters and can use it to supplement her movement, damage, and even range. Her “Arcane Implements” can be used to link any attack card with any other attack card. This allows Licious to easily reach that combo limit of 5.  She has some special Utility against Throws by using Cards such as Balor’s Overhead she can do up to 11 damage to opponents who zig when they should have zagged. Lastly, her super is pretty easy to pull off, but it doesn’t do as much damage as others.

Players choosing Licious will want to be careful about generating meter to fast and going to time when they don’t want to. Also, her strength to attack at range 1-2 with all but a few cards is also her greatest weakness. Her attack range leaves her incredibly predictable and cards that counter ranged attacks like Ciel’s “Shoto Cant” will absolutely devastate her if she doesn’t play smart. Her super is also driven by your ability to generate Nightmare Tokens. This means that most opponents don’t have to be afraid of a random mashed out super even when she has the meter.

Licious is great for players that want to be capable of both zoning and going face to face against their opponents.

Growing up as an orphan, Licious constantly felt alone. Moving from foster home to foster home made keeping friends nearly impossible. Soon enough she gave up trying to connect with anyone. When a petty rivalry caused Licious to snap, all of the anger from being harassed and the frustration at being abandoned surfaced. Her desire to hurt the girl manifested and Licious suddenly saw into the girl’s mind. Together they watched all of the girl’s fears, and felt the pain of it all manifest. Having no control of this newfound power, Licious caused the girl’s mind to snap under the devastation of it all. To this day the girl lives in a constant state of panic and fear. Though Licious is still haunted by the life she’s ruined, showing the girl her fears gave Licious the ability to finally let go of her own pain. After the manifestation of her powers, Licious dropped off the radar and not much is known about her during that time. Even her recruitment to the school of Lod is shrouded in mystery. The only thing that is known for sure is that if not kept in check, Licious’ power could do more harm than anyone could imagine.

Licious and the Nightmares