Our fifth antagonist has been unlocked! Go check out on our kickstarter!

You can read the Lich Wurm fiction here. 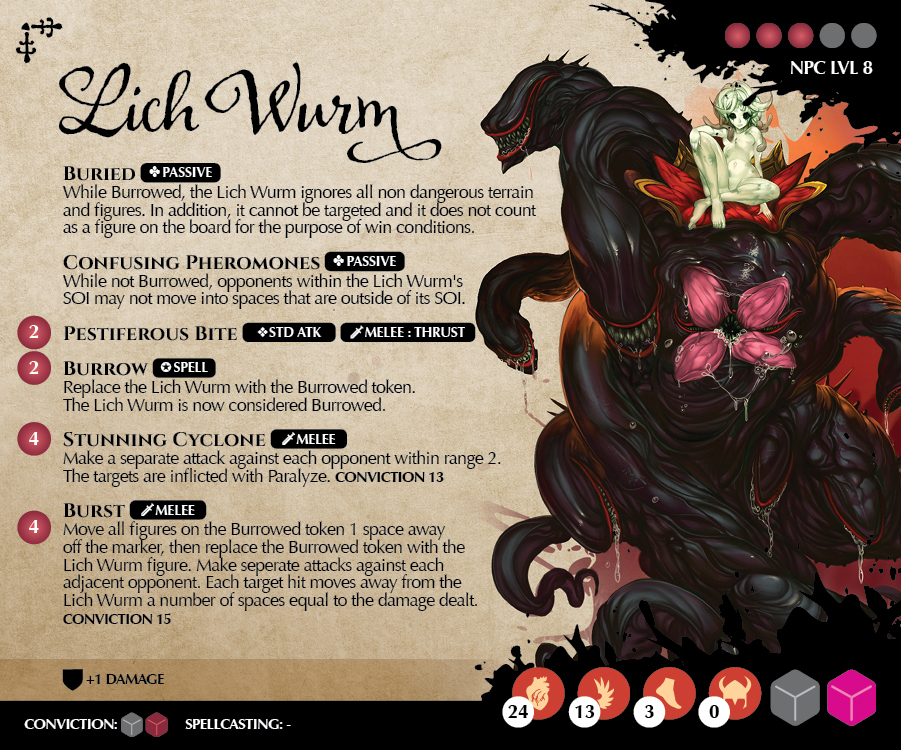 The Lich Wurm has an array of deadly abilities that not only give it multiple attacks, but that also restrict your ability to flee as well as do damage to it. It relies heavily on its ability to attack multiple opponents at once. In addition to the Lich Wurm’s standard melee attack, it can employ the unique ability Stunning Cyclone. This is an attack that hits all opponents within range 2, and can paralyze any opponent it hits.

The Lich Wurm’s Burrow ability keeps adventurers from being able to attack the Lich Wurm while it is buried. Because it does not count as a figure on the board, it can’t be targeted by abilities. The Lich Wurm requires a unique burrowed marker to indicate where on the board it is at any given time.

The strategy here is to place the burrowed marker in a spot where it can attack as many adventurers as possible. When the Burst melee attack is used, the burrowed marker is replaced with the Lich Wurm figure, and it makes an attack against all adjacent opponents.  Not only does it attack each opponent separately, but it pushes back each opponent that is hit back a number of spaces equal to the damage it dealt. 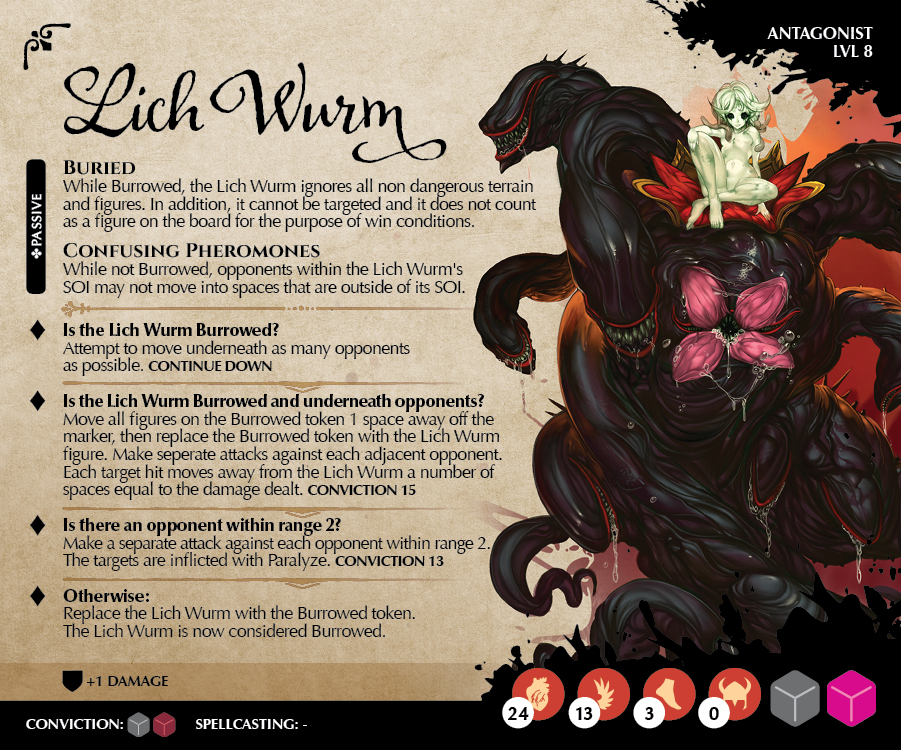 Basics: The Lich Wurm has a massive amount health, and several abilities meant to keep opponents within range. It is important to adjust your strategy in an attempt to stay out of the Lich Wurm’s SOI while still being able to deal lots of damage to it.

Passive Abilities: The Lich Wurm has only two passive abilities, but they are more than enough to prove a challenge. Confusing Pheromone keeps players from moving too far out of range. Once you have stepped into the Lich Wurm’s SOI, you are basically stuck there. As long as the Lich Wurm is alive you will be unable to move to any space that is outside of the Lich Wurm’s SOI.

The other passive ability, Buried, is particularly troublesome. The Lich Wurm’s basic strategy is based on its ability to burrow. Its passive allows it to ignore all figures as well as terrain that is not considered dangerous. When the Lich Wurm burrows for any reason, its figure is replaced with a burrow token and it can then move freely around the board. Because the figure it not considered to be on the board, the Lich Wurm is untargetable. This also means that it does not count as a figure when calculating win conditions.

Action Breakdown: Step number one will always be to check if the Lich Wurm is burrowed or if its figure is on the board. If it is, the Lich Wurm will move up to its movement value to position itself under the largest number of opponents it can. If it is burrowed and in a position to hit multiple targets, it will push back any opponents on its space and then attack. For example, if there are three opponents in a line, the Lich Wurm would move under the middle opponent. It would then move that opponent one square away, and the Lich Wurm’s token would be placed on top of the square it ‘burst’ from. After the Lich Wurm’s figure is placed on the board, it then makes an individual attack against each adjacent opponent. If any opponent is hit, they are pushed away from the Lich Wurm a number of squares equal to the damage taken.

If the Lich Wurm’s figure is already on the board, it will attack opponents within range 2, paralyzing any that are hit.

Lastly, if there are no opponents within range 2, it will automatically burrow.

Weaknesses: The Lich Wurm has no armor and is extremely slow. One of your best strategies is to kite the Lich Wurm around the board if possible. Find ways to avoid its SOI while dealing as much damage as possible. And make sure to take full advantage of the fact that this guy has no armor. Fire all you have at it to make sure you cut down that massive amount of HP as quickly as possible. If you have any heavily armored characters in your group, send them in to soak up some damage and preoccupy the Lich Wurm while the rest of the team stand back and chip away at its health. 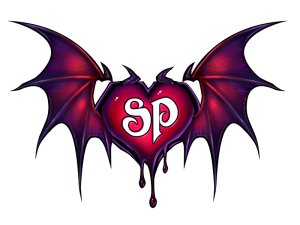 We also wanted to go over the last few things we have promised that aren’t done yet and explain when they will be done.

Lore Video: This will be done before the end of the campaign. It clocks in at around 25 minutes and explains the basics of the world from a teacher’s point of view.

Game Play Video: This won’t be done until after the campaign. Unfortunately this video has been put to the bottom of the priority list because we want to focus on getting the rulebook done first.

After we finish it, we will post it as an update to this kickstarter. Also, we plan on doing an actual “How to Play Video” before backers get their copies. The goal of this video is to get new players playing as quickly as possible.

Rulebook: This will be done sometime after the campaign. Combine our tardiness with our overwhelming success, and we just can’t promise that this will be done before the end of campaign any longer. We will have it done as soon as we can. The word document should be completed by Tuesday. Then we have to finish all the graphic examples. Since the way the rule book is written relies on pictures and graphic examples to explain a lot of rules, we don’t feel confident that you will enjoy reading just the word document. More importantly, the rules we posted on our website would be much more suitable to learn the game from rather than just the word document without pictures.

We apologize to those who feel that our rules on the website is not a good enough substitution for a full rulebook to back our campaign. We completely understand. Like we said before, we honestly do feel that not having a public rulebook and not having review copies before launching our campaign was the biggest mistake we have made on this kickstarter. We’ll make sure it doesn’t happen again.

Middara Mechanics update 4: Crawl Mode vs Story Mode: This might be finished before the end of the campaign. We are preparing it now. Again, there is a lot of graphic design that needs to be done to bring it in line with the rest of the game. But it’s almost finished so we will be working through the weekend.

This update will show off an encounter in the story mode, as well as some fiction. In addition, you will be able to see some of our Crawl Mode cards and how they work. 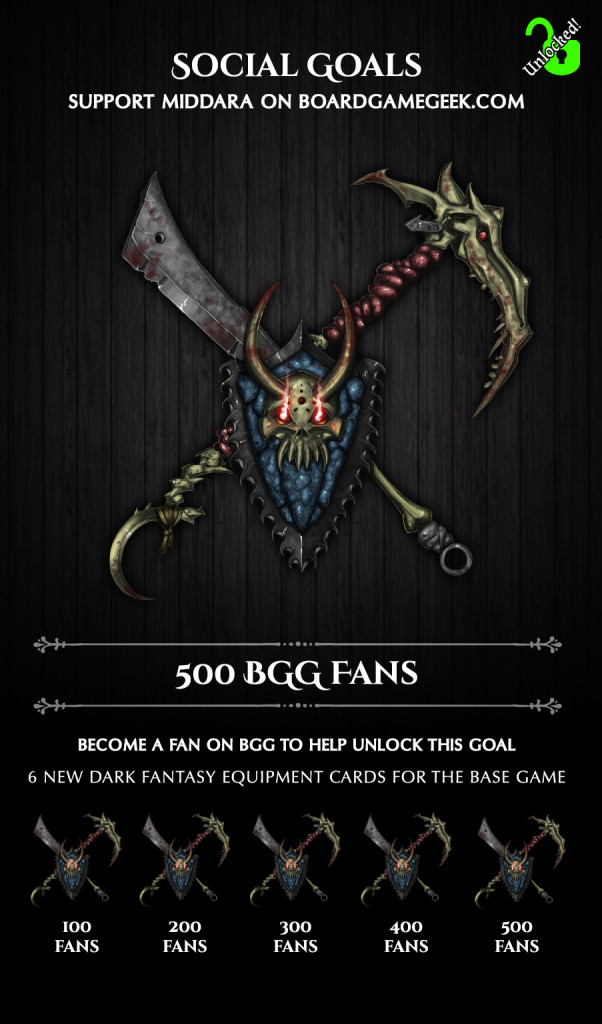 Congrats everyone! That was so quick! It even got us on the hotness. I guess we got to get to work on the dark fantasy card art now!

Thanks for backing and believing in our project!