Our third antagonist has been unlocked! Go check out our kickstarter! 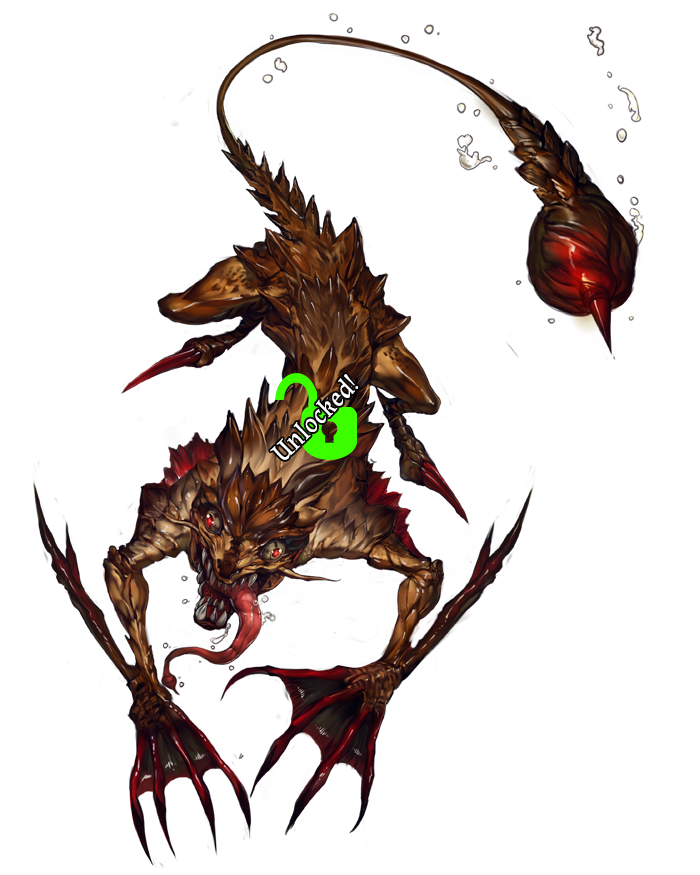 You can read the Merk Hound fiction here.

Merk Hounds are most deadly in the water, whether they are used as an NPC or by a game master. Most encounters that utilize Merk Hounds do so in a way where players would normally need to enter the water for one reason or another. Merk Hounds rely a lot on their speed and multiple passive abilities to boost their damage and movement. They can also hit multiple targets at once, so game masters should keep this in mind to maximize damage.

Making sure to take advantage of their passive abilities by keeping Merk Hounds within close range, this will significantly boost their damage. Combining this with Down the Masses can be a great combo. Using the Merk Hound’s speed boosts to close in and Immobilize opponents can be a solid strategy to force players into melee range and keep them exactly where you want. 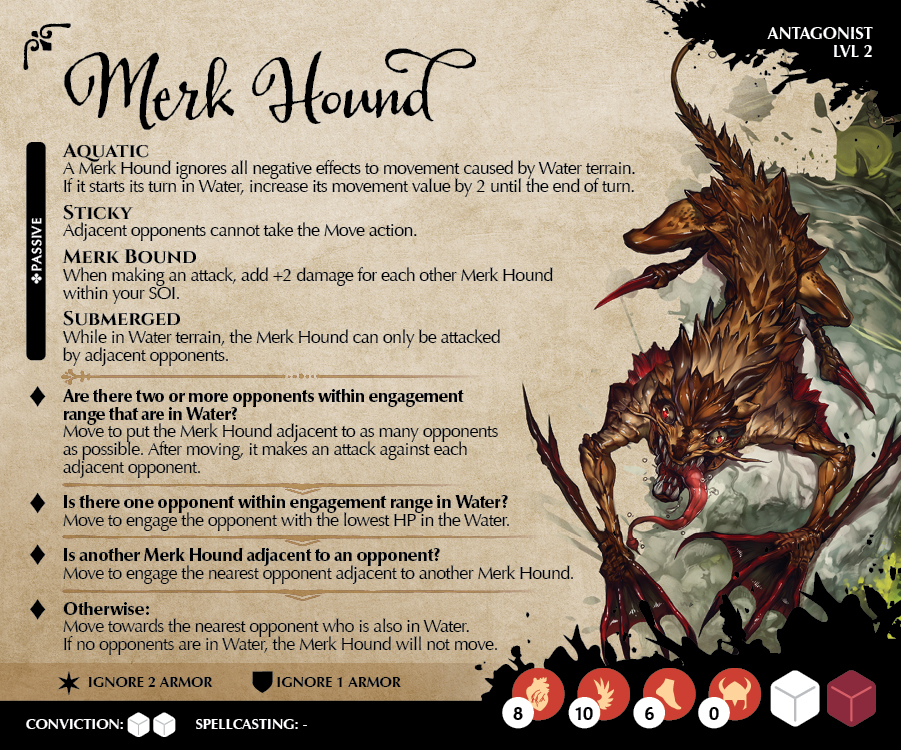 Basics: Merk hounds are not restricted by movement when in water spaces, and have a wide array of passive abilities that are particularly harmful to those foolish enough to wander into the water. They rely on speed and the passive boosts they get from staying in SOI of each other.

Sticky keeps players who find themselves adjacent unable to take move actions. While it may seem to be the best option to avoid close combat with a Merk Hound because of this, players have to be cautious. Submerged gives the Merk Hounds the passive advantage to which they can’t be attacked while in the water unless players are adjacent. This makes your best option finding a way to pull them out of the water by using abilities like Chains of Command.

Merk Hounds also receive bonuses when within SOI of each other, so it’s important to keep them away from each other. The passive ability Merk Bound increases this bonus depending on the amount of Merk Hounds that are within range. Lastly, not only do Merk Hounds ignore negative movement effects in water terrain from being Aquatic, they also increase their movement value when they start their turn in water.

Action Breakdown: The Merk Hound’s first action tries to take full advantage of their passive abilities. The first priority for the monster is to attack as many opponents as possible that are within range, that are also in the water. The Merk Hound will move within range of as many opponents as possible, and is allowed to make an individual attack against each one. So make sure to keep your party stretched out. If the Merk Hound cannot attack more than one opponent in a single turn, it will move to the opponent in the water who has the lowest HP.

The next action on the list, is that if another Merk Hound is adjacent to an opponent, the Merk Hound will move towards that opponent. This takes advantage of their passive ability to boost their attacks by staying close. Otherwise, they will simply move towards the closest opponent in the water.

If there are no opponents in the water, the Merk Hound may get upset, but he won’t actually do anything about it. He’ll just sit in the water and pout.

Weaknesses: Short of simply avoiding the water all together, anything you can do to forcefully pull Merk Hounds out of the water will usually be the best course of action. Make sure to be aware of your group’s positioning on the map, and their relation to other Merk Hounds. This takes away all but one of their passive bonuses, and limits their ability to attack almost entirely depending on how you have situated your group. This will also leave them open to ranged attacks, something which you cannot hit them with while they are in water spaces. Because they have such low armor and health, circumventing their passive abilities makes them easy targets.