Time to showcase the Animate and Cave Sickle’s mechanics. In this update we will go over how these monsters fight and how they are beaten. Just a heads up though, these monsters are subject to change for the final product based upon our play testing experience with them.

First up is the Animate. 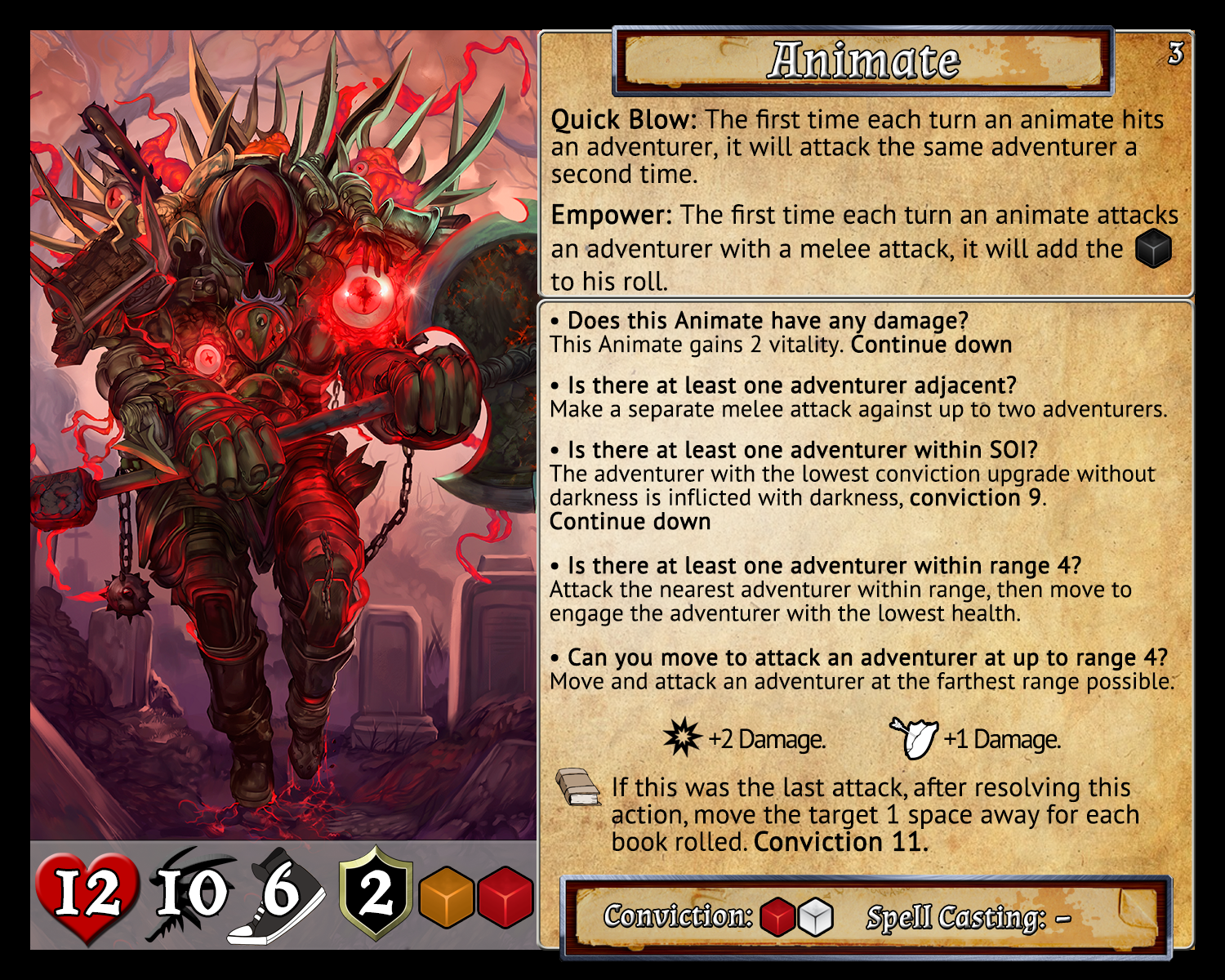 Basics: Animates are usually the first antagonist that players encounter with an armor value. This can be jarring as attacks that would have normally chipped away at a creature vitality are now being reduced to zero. In addition, their attack dice is definitely beyond mundane weapons. To compete 1v1, adventurers will want to be equipped with common or better weapons and armor.

Passive Abilities: Animates are the first creature encountered that uses the empower ability to add the black die. This makes their attacks hit very hard for their level. Combined with Quick Blow, they can kill an adventurer who doesn’t have an evade action readily available. The trick is to evade their first attack so that they don’t get another for free.

Action Breakdown: If the Animate has been dealt any damage they start their turn off by healing for 2. Since the first ability on their list continues down, not only will this healing happen every turn, but they will also try and deal some damage. Given their ability to heal combined with their armor, an adventurer with the ability to cause disease would be very helpful.

Next up, if at least one adventurer is adjacent, they make an attack against up to two separate adventurers. Now since this action doesn’t instruct the players to continue down, it wouldn’t be a bad idea to exploit this and only have one adventurer adjacent at all times. As a matter of fact, an Animate is the least dangerous when it starts its turn while only one adventurer is adjacent to it. But with that in mind, when making its final attack during a turn the Animate can spend a book to move its target away up to 7 spaces (the maximum amount of books possible on an empowered roll.)

But, assuming there isn’t an adjacent adventurer, the Animate will attempt to cast darkness on an adventurer within SOI. After casting darkness, he continues down and makes a ranged attack against an adventurer. And then finally he will move into close combat and attack. This string of attacks is subject to his passive Quick Blow, and his final melee attack is subject to his passive empower ability. This is what players want to avoid having happen. If the Animate is within range 4, but not adjacent to an adventurer he can cause a lot of damage to the group. And if he happens to successfully cause darkness on an adventurer then you are in a lot of trouble.

Unfortunately, an Animate who starts its turn not adjacent with an adventurer, or within range 4, will always try to kite the players by staying at range 4 and making a ranged attack. They will continue doing this until it can start its turn with a adventurer at range 4.

Weaknesses: The lack of spell casting makes avoiding the Animates darkness spell relatively easy for a player with even the most basic conviction upgrade. In addition, they have only okay conviction dice. This makes them an easy target for even the simplest of spells.

Second, we have the wonderful and dashing Cave Sickle. 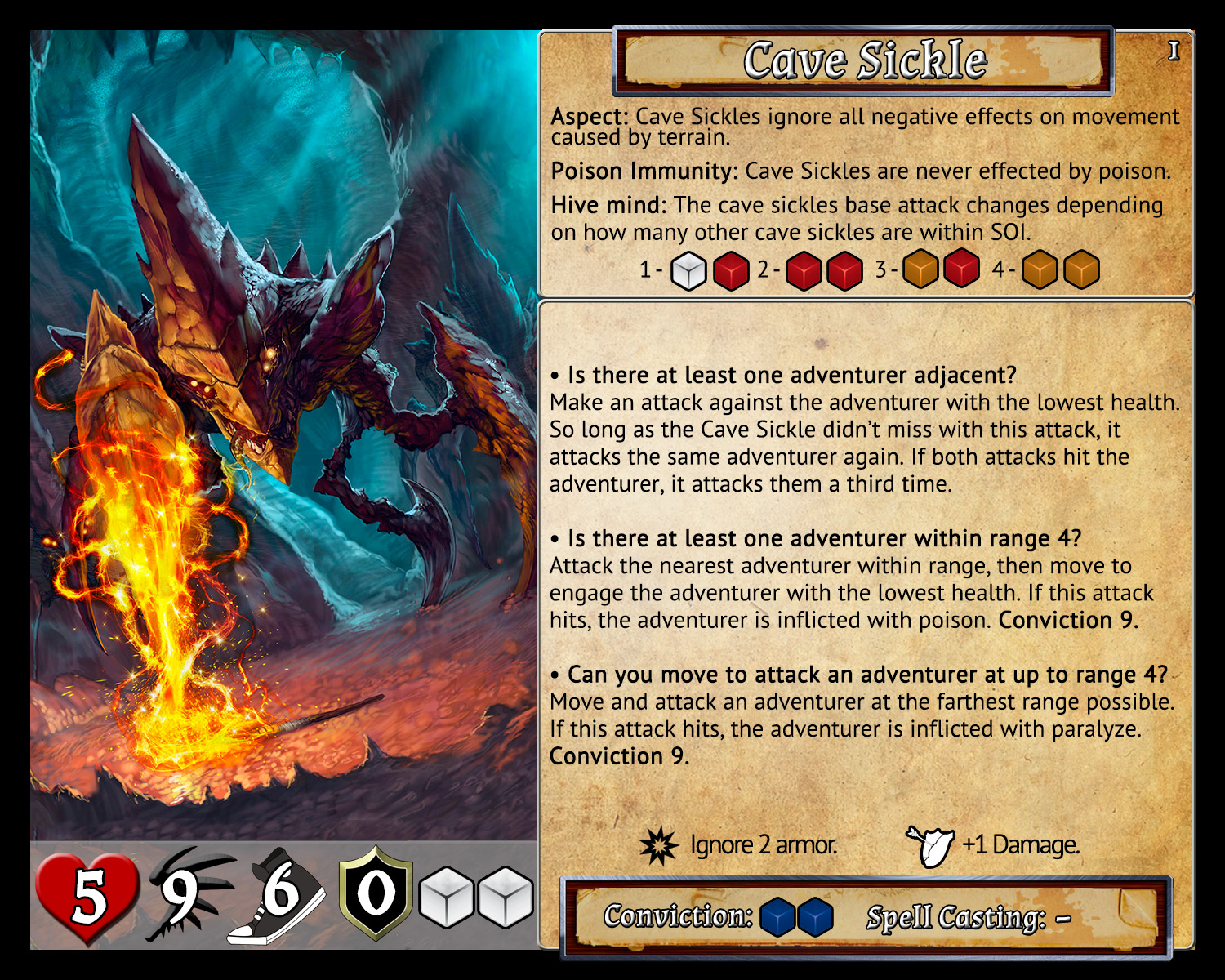 Basics: These are the first swarm monster we will be going over. By design, swarm monsters get stronger in groups. In this case, the more Cave Sickles are attacking, the better dice they use. However, swarm monsters usually tend to be very squishy and can be killed very easily.

Passive Abilities: Aspect makes Cave Sickles particularly troublesome when fighting them in water. Additionally, they cannot be affected by poison. This rules out using Acid Splash to kill them all in one go. Lastly, their Hive Mind ability allows them to upgrade their attack dice as more of them gang up on an enemy. Even when adventurers are properly geared, Cave Sickles can still pose a significant threat.

Action Breakdown: Cave Sickles are some of the simplest antagonists in the game. They start off by attacking an adjacent adventurer. So long as this attack didn’t miss, the Cave Sickle will make a second one. And if both attacks hit, it will make a third. This makes dodging the first attack vitally important for the adventurer the Cave Sickle targets.

Next up, if an adventurer is within range 4, the Cave Sickle will make an attack against them. After making this attack, they will attempt to get adjacent to the same adventurer and make a melee attack. If either of these attack’s hit, they can inflict poison. While the Cave Sickle’s base attack dice aren’t very good, they rely on numbers as well as poison to kill their opponents.

Poison is a very strong status effect in Middara, and can be very deadly to adventurers of any level and at any point in the game. However, there are many ways to outright negate it, as well as remove it. Various equipment in Middara has the ability to prevent or remove status effects. In addition, abilities like Soul Clear can remove both negative and positive status effects from figures. With that said however, an adventurer inflicted with poison who has no way of dealing with it will find themselves dead within a few turns.

Lastly, if there are no adventurers within range 4, the Cave Sickle will move to attack an adventurer at range 4. If this attack hits, it will inflict Paralyze. If an adventurer isn’t careful, this will allow bigger, and more powerful antagonists to kill them easily.

Weaknesses: Cave Sickles are weak to all forms of spells and attacks. However, melee attacks can more easily deal damage to a wider group of targets, especially early game. This will however, put you within the most dangerous range of the Cave Sickle.