Time to showcase the Earth Loa and Water Loa’s mechanics. In this update we will go over how these monsters fight and how they are beaten. Just a heads up though, these monsters are subject to change for the final product based upon our play testing experience with them.

First up is the Earth Loa. 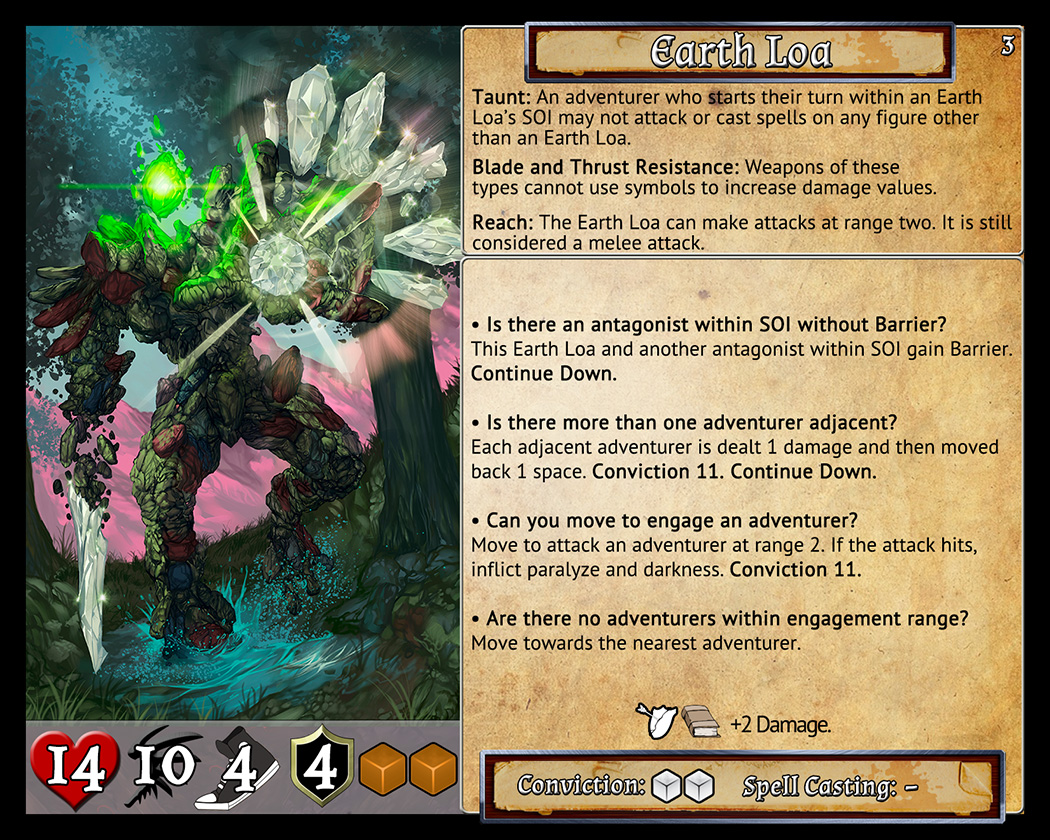 Basics: Earth Loa pose a serious threat to adventurers. Their high armor and high vitality make them nearly undefeatable by adventurers who are ill equipped to face them. These can be particularly devastating to an adventuring party with no armor penetration and poor mobility.

Passive Abilities: Earth Loa are a feared opponent among amature adventurers. Their ability to Taunt and force adventurers to attack them can quickly ruin a well prepared plan by the players. They’re also resistant to a third of the weapons in the game. This prevents players from overcoming their armor with the empowered dice. Lastly, the Earth Loa is large; its reach gives it the ability to hit targets at an additional space away.

Action Breakdown: Earth Loa open up defensively by casting Barrier on themselves and another antagonist within SOI. This raises their armor to 5 at the very beginning of most encounters.

Next, if the Earth Loa can move and attack an adventurer at range 2 they will.  If this attack hits an adventurer it will cause paralyze and darkness. This combination of status effects can outright shut down even an well equipped adventurer. It’s important to note that Earth Loa only has a movement value of 4 and they also have a short range. This means a vigilant adventurer could kite, or get around fighting some Earth Loa depending on the encounter’s win conditions.

The last thing they will do is simply move towards an adventurer. Earth Loa are pretty simple minded. In most encounters you will find that they serve as guardians of loot or cause you problems as you try to achieve victory conditions. But with some tactics, they can be outright avoided.

Their symbols only add damage. This gives them no utility outside of their Taunt passive.

Weaknesses: Earth Loa lack magical capabilities. They have no spell casting dice and have a very weak conviction. This makes them very vulnerable to offensive spells. While they hit hard, a player can simply stay away from them to avoid damage.

Now for the magnificent Water Loa! 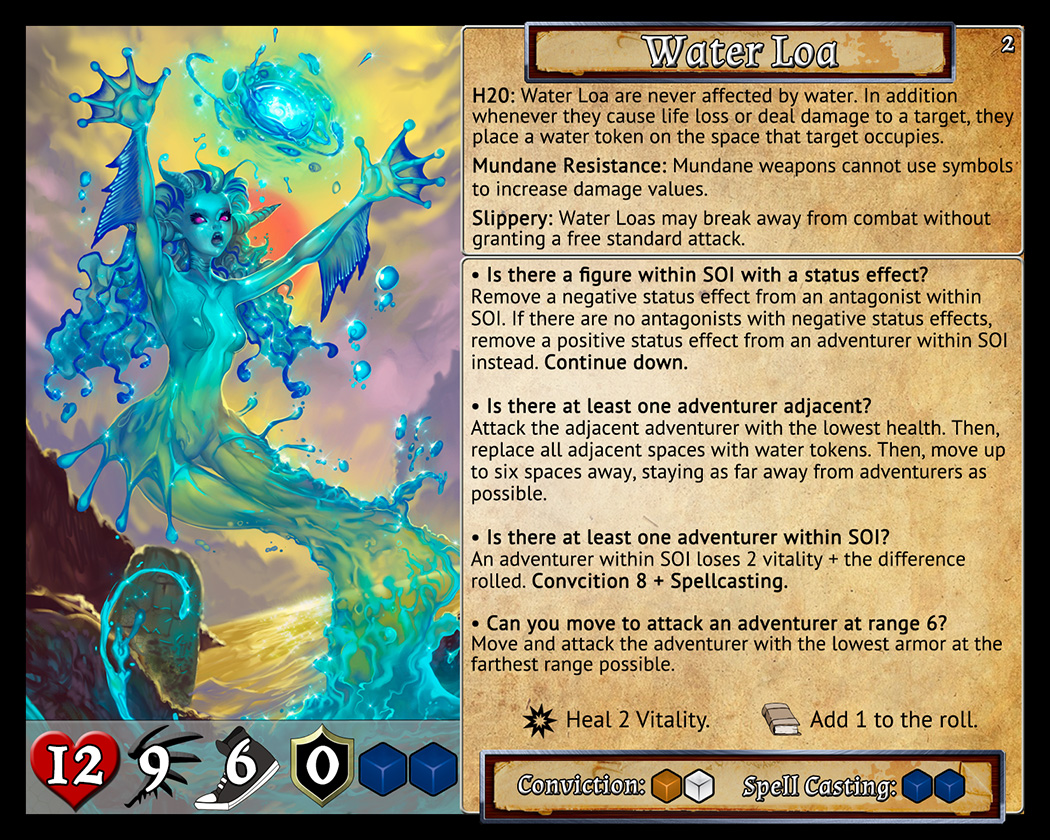 Basics: Typically, a Water Loa will stay on the outskirts of the playing field, casting spells and poking at the adventurers who look the most vulnerable. When confronted, they will flee and kite those who chase. This can be a particularly frustrating opponent for those who feel the need to kill everything during the encounter. If a pursuer isn’t careful, they might find themselves isolated and in trouble.

Passive Abilities: Their passive abilities can make the an infuriating opponent for adventurers with a slower build. They are immune to the terrain effects of water, and whenever they damage an adventurer, they will replace his occupied space with water. They’re also resistance to all mundane weapons, which is a fourth of the available weapons in the game. And then, even if players are able to corner them, their last passive gives them the ability to escape without granting free attacks to those around them.

Even if an adventurer can finally get close to a Water Loa, they will attack them and flee, leaving water in their wake. This can really bog down the adventurer that has already just risked making himself vulnerable to try and kill the Water Loa.

At range 4, the Water Loa will cast a spell that can catch adventurers without a decent conviction upgrade and lay them to waste.

At the end of it all, the Water Loa’s farthest range attack will typically only pick on adventurers who don’t wear armor.

Weaknesses: Luckily, Water Loa are very easy to kill with any weapon that ranks better than Mundane. This means that a blow from even the simplest of magical warhammers will send them crashing back into the dirt. We don’t recommend casting spells against them since they have a good conviction for their level, but a good ranged weapon will do wonders in keeping them away from a vulnerable party.

Thanks for reading our Loa mechanics update! We have updated the kickstarter to include their lore!