Middara is a 1-4 player cooperative story telling miniatures board game. The game takes place in an ultra-modern fantasy setting that exists alongside our very own earth. Middara has a true point buy system built into its very design, allowing players to ditch traditional classes and instead focus on building the character they want to play using a combination of over 110 unique abilities and 111 unique pieces of equipment. Mixing and matching these means that you can be anything you want. A fighter who summons monsters and sucks the life out of his enemies is as easy to build as an archer who heals and can manipulate time.

Middara features an in depth, fully narrative driven adventure that contains over 20 hours of content. In what we call Story Mode, the narrative confronts you and three of your friends with real decisions that change the course of the story and its outcome. We call this the “Narrative System”

In the Narrative System, encounters that players participate in directly change the outcome of the story. Characters can live or die and villains can be thwarted or even get away with their machinations. Even outside of the combat, there are moments in the story where players are faced with decisions that have real consequences in the story. While players will experience short term effects from their choices, the Narrative System really shines in long term effects. The villain that got away can return to thwart the players in a later encounter, or an old friend may appear to change the tides of a battle.

For gamers who don’t want to deal with a narrative, but still want to enjoy the tactical combat and deep character customization, we have a mode called the Crawl Variant. In the Crawl Variant, players participate in one of eight encounters that are light on the narrative, and heavy on the combat and mechanics.

Lastly, to add a bit of competition, as well as a fifth player, we also have a fully integrated rule set that allows a player to control all of the antagonists in the game. This allows one player to control the monsters and NPC’s that battle against the players. This option can be used in both the Story Mode and the Crawl Variant

How does the Narrative System work?

Even though there are many ways that Middara can be played, the primary focus has always been through a narrative driven story. Middara contains an adventure book that contains the story, as well as setup instructions and encounter information. Players each choose one of the characters included in the story. Some stories can be played with 1, 2, 3, or 4 players. The first one we will be publishing requires 4.

Each character has an associated character card with information on it. On the front is information about the character’s skills and any special abilities they have. 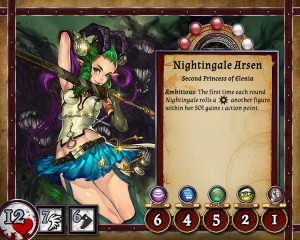 Each character starts with his or her first personal plot. This plot is unique to each character and describes the characters current situation on Middara. Sometimes, the character’s plots will tell you when they resolve on the card, while sometimes the adventure will indicate when a plot resolves. Either way, after resolving, the plot is advanced and they are dealt a new plot card. The next plot card they get is dependent on how they resolved their previous plot card. The character’s choices can affect their situation positively or negatively, or sometimes it is ambiguous.

As the story progresses, players will also be resolving their personal plots, which can dictate everything from how the game ends to how it might continue in a later installment. Regardless, personal plots are usually resolved in a way that is directly based on the player’s choices or performance while playing that character.

So, how does the story actually get told? The adventure book of course! The adventure book holds the narrative, encounters and story rounds. During an encounter, players are instructed to setup the board from a pool of over 50 board tiles. This board represents different locations in the world, such as magical forests, caves, cellars and inns. After setting up the board, placing antagonists, and reading the win/lose conditions, players begin the encounter.

During the encounter, players move their pieces around the board using tactical table top combat to overcome challenges in the form of monsters, bad guys, challenges, traps, and other narrative driven obstacles. For example, the players might have to stop a ship from crashing by taking its helm during the encounter. Or perhaps they must solve a puzzle to gain vital information before a tunnel collapses.

What makes these encounters so compelling is that their outcomes have far-reaching effects which determine how the story moves and resolves. Friends and family might get killed, or they may survive. Maybe the players avoid some problems entirely, only to be faced with a whole new challenge. It’s up to the players to make good decisions in order achieve the best ending they can.

Sometimes the adventure book will direct the players to participate in a story round. During a story round, players have to make hard decisions that direct where the story moves, what encounters might happen, and how a situation might get resolved. In addition, players spend experience points and gold to make their characters stronger.

So how long does one of these stories take?

From our play testing we estimate that seasoned players could get through the entire story in just over 20 hours. This is, of course, split across multiple sessions of about 1 or 2 hours. We understand some people are hesitant about the idea of an involved campaign that requires the same players to participate consistently for over 20 hours. This is why we have included the Crawl Variant. A full game in its own right, the Crawl Variant focuses on combat and mechanics for a short romp in an encounter designed to be played in a single 1 hour session.  This allows you to play the game with any random group of individuals in a single night.

What is point buy and how does it work?

Point buy basically means that players can pick, choose, mix and match from a list of options that cost some amount of currency. In the case of Middara, this is experience and gold. In Middara we don’t have classes or races or other restrictions like that. Instead, we allow any character to attempt to specialize or diversify in any of the abilities or equipment in the game. This allows for thousands of combinations, making each time you play a new and different experience.

We assume that most systems avoid this option because of its inherent flaw of being unbalanced. With Middara we have spent over two years play testing and are still working very hard to make the game as balanced as possible, while still making every ability a viable choice.

So there you have it. You can take any character and make them a warrior, a ranger, an assassin, or a wizard. Sure. But why not an assassin-wizard? Someone who dual wields scimitars and summons entities to smite his foes. Or a warrior who specializes in bows but trains in armor as well, so that he is capable of going toe to toe with the enemy when things move in close.

In Middara, people never age, giving them many more opportunities to learn skills then those with a limited life span. There is no cap to the abilities that a character can learn. In any given story, there is a limit of xp that can be gained, but this doesn’t mean that there is a hard cap within the mechanics. If you want to keep playing after the story is finished, we sure aren’t going to stop you.

What kind of abilities do you have?

In the base game, we have five different ability trees. Each of these trees can be mixed and matched to build your own personalized character. Even though they all mix and match very well, players can also build very strong characters by focusing on a single tree.

Assemblage: Summoning and status affects with the help of demons, monsters, and spirits.  Assemblage can be used to buff yourself, carry more items, or even as a tool to summon familiars, monsters, or even demi-gods for devastating effect. Assemblage is considered the most varied amongst the abilities in its capabilities. However, it is limited by many abilities that can only be used once per encounter.

Cruor: At its core, Cruor is blood magic. Its abilities are very Faustian in nature. Players choosing Cruor must be okay with the idea of giving a little to gain a lot. In addition to being able to deal damage, heal, and inflict negative status effects, Cruor can change your very being into something more than human. Characters going this rout can gain wings, move farther, and make pacts with greater entities to further their own ends.

Martial: Marital encompasses all non-magical combat properties. Players can use martial to build range builds, melee builds, tanks, and glass cannons without ever having to branch out. Martial also has a focus on increasing critical chance, increasing your ability to dodge, and allowing attack more often. Almost any build can be complimented by martial abilities.

Sanctus: Imploring the gods to do your bidding has been done before. However, Sanctus isn’t just your average holy spells from a role playing game. It has the ability to do much more. Players in Sanctus can gain immortality, redirect damage, heal, deal damage, and even fold reality to teleport themselves or others. Sanctus can complement a melee or range build. It’s also capable of buffing players or dispelling negative effects.

Subterfuge: Subterfuge does massive damage in either melee or ranged. Most of subterfuge’s focus is on big damage, but it also has huge defensive potential by allowing players to dodge, take free actions, and move without penalty. Subterfuge is commonly opted over martial as a compliment to other ability trees.