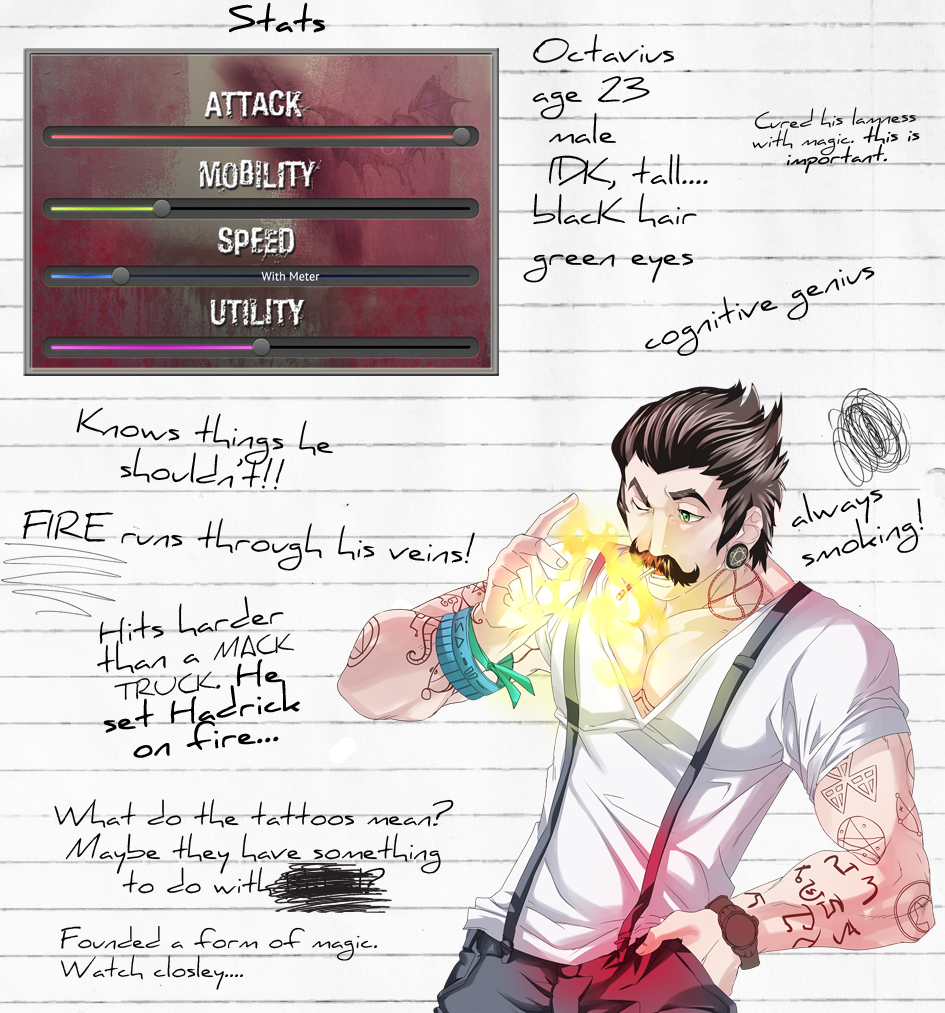 Octavius is the games powerhouse. Through careful positioning, and a little luck, a player can decimate his opponent in just a few turns. His ability to gain more meter than the average character puts him in a very lucrative position over the opposition. Because of this, he is capable of pulling off his ultra as soon as turn two. However, his attacks are slow without the meter to speed them up, but that’s just the thing, with the meter, he can beat most attacks out. Octavius is one of the few characters with a command grab. This allows him to travel some distance and throw his opponent. This trump card, coupled with his medium attack which can move him a great distance, allows for amazing versatility at two spaces. One of Octavius’s greatest advantages is his heavy attack called Meaty Fierce. With the proper meter he is able to make this attack as fast as he wants. This will beat out almost every attack in the game and deal an incredible amount of damage.

Players choosing Octavius will find he is very meter dependent. If his opponent can deprive him of meter on the first couple turns then he will be unable to stop them from zoning him, or even just hitting faster and moving away. Without meter, Octavius suffers a huge penalty in both his capabilities to move, and keep up with the speed of other characters.

Octavius Is great for new players, and players who want versatility and strength. Screw the finesse.

Born a child prodigy, Octavius achieved more than most could dream of doing in their whole lives at an early age. He was born to a wealthy family that was able to cater to his advanced skills and thirst for knowledge. An unfortunate event changed his life forever when his body was left mangled and crippled after his home was attacked by a terrifying monster. The Erelim were able to save him from the creature, but his friends and family weren’t so fortunate. Believing he hadn’t been chosen to attend Lod, the Eerelim erased his memory of the event and left him behind. However, even through the memory wipe, Octavius knew something was wrong. Determined to find out the truth, he delved into the occult for answers. But the memory wipe was so strong that for each piece of knowledge gained, more was lost. When he stumbled onto a map leading to a school called Lod, he tattooed it on his body to keep from losing it. Eventually recognizing his innate talents for the occult, the school revealed itself to him. Attending Lod has now given Octavius not only the chance to tap into lost arcane knowledge, but to use his new found skills to restore his broken body.

Octavius and the Search for Knowledge