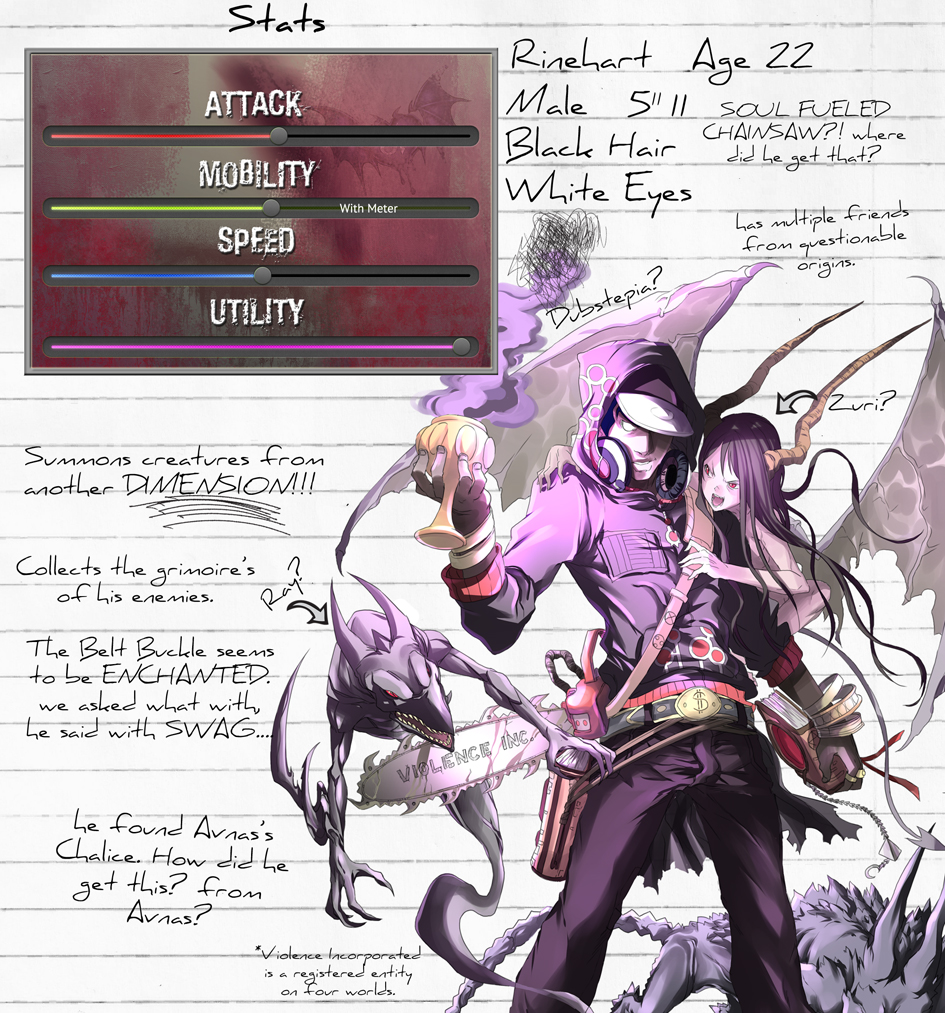 Rinehart is the games most dangerous Zoner. He specializes in keeping his opponent away from him and killing them at the same time. His ability to spend souls on various utility throughout the game gives him an incredible amount of options at any given time. Even when adjacent to an opponent, Rinehart has options available to make his opponents suffer. And his ultra, while difficult to pull off, can kill some characters in a single blow. His strengths lie in his ability to do what he needs to do, when he needs it. In addition, Rinehart has incredible mobility and the rare ability to prevent his opponents from moving.

Players choosing Rinehart will want to keep their distance when they can. Up close, Rinehart has fewer good options, but far away he has the fastest ranged attacks in the game. Rinehart’s hand size prevents him from easily pulling off bigger combo’s but his options are rarely limited by this. Meter and souls are an important part of his core strategies to winning. Rineharts ultra is by far the hardest to hit with in the game, this puts him at a disadvantage to very mobile characters who can take advantage of his inability to use his super on them.

Rinehart is great for players who want to play the swiss army knife of the game. Lots of options, lots of plays.

Rinehart learned at an early age that no matter how dependable, honest and hard-working he was, life was extremely unfair. Growing up in a family that seemed his complete opposite, he decided after years of their irresponsibility, and the burdens they placed on him, that he needed to get away from it all. After many great struggles, he was finally able to send himself to college and break his ties with those who only brought him down. However, college would prove to hold it’s own challenges, ones that were perhaps worse than any he had previously faced. Coming home from class early one day he stumbled on his roommate attempting to summon a giant demon from a fiery abyss. Despite Rinehart’s fumbling attempts to stop this disaster, it wasn’t until the Erelim showed up that the demon was banished and the portal was closed. Recognizing his potential, despite the fact that he was unable stop the summoning, the Erelim offered Rinehart a place at the school of Lod. Seeing this as an opportunity to become something greater than he had imagined, Rinehart focused his time to find new ways to merge modern tools and magical talent.

Rinehart and the Summoner